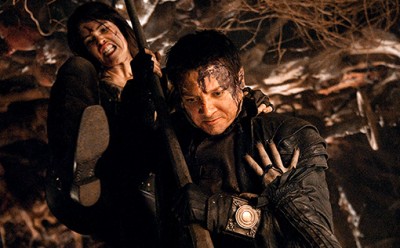 Hansel (Jeremy Renner) has diabetes. This is not a throwaway character trait, not a bit of bizarre nuance in a quasi-steampunk re-imagining of a Grimm fairy tale. The fact that Hansel must stop combatting the forces of darkness whenever his wrist-alarm-thingie goes off so he can inject himself with insulin is a full-fledged, God’s honest plot point in writer/director Tommy Wirkola’s film. Oh, and Hansel and Gretel don’t have German accents but American ones. Oh, and in the climax a “white witch” fires a Gatling gun filled with magic bullets. Oh, and I think Gretel (Gemma Arterton) wants to get it on with a troll.

Hansel and Gretel: Witch Hunters is pretty much insane. And maybe it’s supposed to be. Maybe it’s supposed to be outright funny; after all, renowned funny-folks Will Ferrell and Adam McKay are listed as producers. Intentional or not, it’s somehow vastly watchable. It is lithe (88 minutes), has unique character designs for its witch posse and features copious abuse to Peter Stormare’s nose. All “pros” in anyone’s pro/con list.

The story goes that a young Hansel and Gretel were abandoned in the forest by their father and stumbled upon a house made of candy (more on diabetes in a minute). The house was a trap that they escaped by shoving a witch into fire, which apparently they took as career counseling. Fast forward a nondescript “many years later,” and the brother and sister (who are a wee bit too “Leia and Luke” for comfort at times) are roaming witch murderers.

They do this for money, which is silly because they have invented machine guns and apparently diagnosed and treated Hansel’s “sugar sickness” with home-made insulin, so they could probably find non-witch-murdering work if they wanted. When they stumble upon evil super-witch Muriel (Famke Janssen) they discover secrets about their past and tangle with the most dangerous non-candy-based danger they have ever faced.

Give Hansel and Gretel this much: it goes for it. From dudes who explode because they have eaten too many maggots to inventive and fun ways to disembowel and otherwise harm spell-casters, it relishes in its R-rating. What’s more, Janssen in particular tears into her wicked role as though she had been sitting around waiting for someone to invite her to “Ham-Fisted Acting Prom.” Renner is, well, Renner; kind of bored, super glowery and sufficiently cool. Arterton, who is admirably treated as an equal co-protagonist and not a tool to be kidnapped, threatened or killed to motivate Hansel, is equally action-movie adept. Props on a flawless American accent too, even if it makes no sense why she has one.

Hansel and Gretel is just all kinds of dumb. It even engages in the lamest form of 3D (the kind where things fly RIGHT AT YOU). But it is also surprisingly original, completely self-aware and impressively light on its feet. Do not take this as a begrudging recommendation so much as an acknowledgement a good time was had…a shame-filled, idiotic good time…