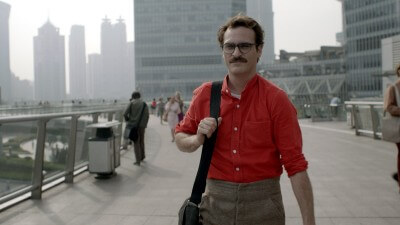 The most laughable part of Her isn’t the complex, sophisticated romantic relationship between a man and his software operating system; it’s the high-waisted, Clint Eastwood-esque pants everybody wears. Forget flying cars; just promise us a future where we don’t have to unzip to scratch our bellybuttons.

To be fair, this silly fashion is a logical extension of the oversized, lensless glasses and various goofy-ass accessories that define hipster-chic, which actually speaks to what makes Her so remarkable. To borrow a phrase from Jonze’s good friend, Kanye, the film manages to “pop a wheelie on the zeitgeist,” using near-future sci-fi to draw stylish attention to the moment in our present when human interaction seems to be evolving.

Joaquin Phoenix is Theodore, a mustachioed dweeb whose job is writing beautiful love letters for other people to give to people. Good lord is that depressing, if you think about it. You want sadder still? Theodore’s wife (Rooney Mara) is divorcing him, causing him Instagram-style flashbacks of the cutest, cuddliest, sexiest memories all day. Dude needs a partner or a hobby…fast.

Along comes Samantha (Scarlet Johansson), an artificially intelligent software operating system. If someone isn’t working on a mashup between Terminator and Her, then the Internet has failed, as these systems keep evolving in scary ways humans can’t predict. Samantha and Theodore fall in love. Real love. Deep love. In a conversation with his newly single and human friend Amy (Amy Adams), we discover that he isn’t alone; other people are dating their O.S.s. too. In fact, some people are dating other people’s O.S.s. This leads to a final act that uses science fiction conceits to drive home a profound truth.

Only, just what that “profound truth” is will kind of vary person-to-person, however. Some will see Her as an indictment of what we’ve done to ourselves by digitizing human interaction. Others will choose instead to focus on the hopeful concept that every time we love, no matter how we do it, it helps change the person we are. There’s more than that though, as Jonze urges us to revise the one constant in all our relationships: our selves.

Phoenix is breathtaking. He gets more attention for gnashing and spazzing, for violent outbursts like in The Master or drug-fueled depression in Walk the Line, but this is more impressive. One wrong step by him, and Her would have been an unintentional laugh riot. Johansson is equally remarkable. Saying her appearance-free work here is her best since Lost in Translation feels like an insult until you see it…or hear it, you get the idea.

Her wasn’t as fantastically profound emotionally as the similarly toned Eternal Sunshine of the Spotless Mind. It lopes a bit in the middle when you want it to run. If you bought the premise initially, the trailer pretty much spells out all the emotions you’ll have. Still, it’s one of the most original relationship movies in years, and will leave you reflecting on the global evolution of love as well as your own individual progress.