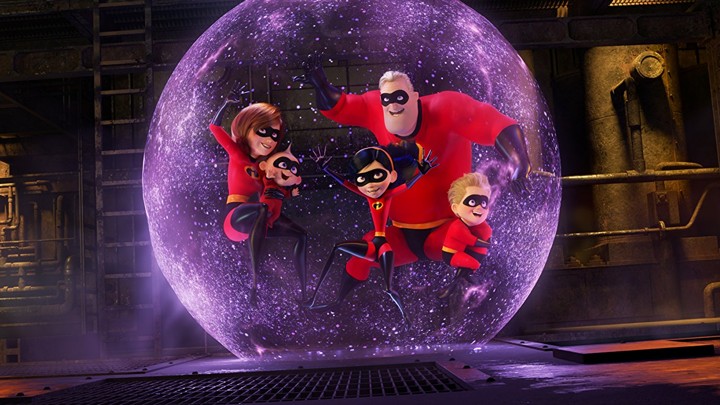 Over the years, The Incredibles has somewhat cloyingly become the thinking person’s answer to “best superhero movie.” Writer/director Brad Bird’s original stylishly-sly Fantastic Four riff remains a very fun, very good movie that has been heightened to the status of “unassailable classic” by the irresistibly immovable force of nostalgia. Maybe that’s why Incredibles 2—itself a very fun, very good movie—feels kinda like a mild disappointment. Waiting 14 years for something that doesn’t wind up being earth-shatteringly brilliant feels like raising a teenager who pulls down a 3.0 GPA and is defined by a love of the saxophone. That’s a perfectly good and pleasant outcome! It’s just that everyone was kind of hoping for the next Marie Curie or LeBron James… Look, nobody’s disappointed! We’re just not “appointed,” you know?

Despite taking a high-schooler’s lifespan to get going in the real world, Incredibles 2 starts in the immediate wake of the first film. Mr. Incredible (Craig T. Nelson) and Elastigirl (Holly Hunter) are joined by their children, Violet (Sarah Vowell) and Dash (Huck Milner), and Frozone (Samuel L. Jackson) in a battle against The Underminer (John Ratzenberger) that officially puts superheroes back in the spotlight. Ultrawealthy siblings Winston (Bob Odenkirk) and Evelyn Deavor (Catherine Keener) see this debacle and offer to bankroll Elastigirl in an attempt to boost public support to make superheroes legal again.

This arrangement means Mr. Incredible has to stay home with the kids, including baby Jack-Jack, whose burgeoning powers turn him from adorable booboo into a literal hellspawn. So he’s basically exactly like every real baby. Despite Incredibles 2 being set in a world without smartphones, an evil villain named Screenslaver uses technology to hypnotize and manipulate others. If you guessed that this all leads to a spectacular superheroic showdown, your GPA was at least on par with an aforementioned saxophone player’s.

The world of The Incredibles is still a helluva place to visit. The pop-art-esque depiction of 1960s-era atmosphere remains just as fun to look at, and the Incredible family is just as relatable and endearing. Poo-pooing physics costs less for cartoons, so the rip-roaring action sequences are as gloriously pulpy as the comedy beats are indignantly irresistible. Bird even wisely limits the breakout character he voices, Enda Mode, to a delightfully apportioned supporting role.

The original came out near the birth of the current superhero cinematic boom and served as a sort of kindly, Mr. Rogers-ish reminder to temper adventurous imagination stories with kindness and love. This second film could have easily commented on the over-proliferation and potential exploitation of comic book source material. Instead, it opted to massage the backs of beleaguered parents in the audience, many of whom were just kids themselves when the original was released. That’s a perfectly good and pleasant outcome! It’s just that some of us were kind of hoping for more than a “feminism is validating that raising kids is hard” message…

Incredibles 2 never justifies “why now” or tries to do more than make people who love their families despite life’s frustration feel good. That doesn’t prevent it from being a very fun, very good movie. It does, however, mean nobody will breathlessly be waiting 14 years to see what’s next.