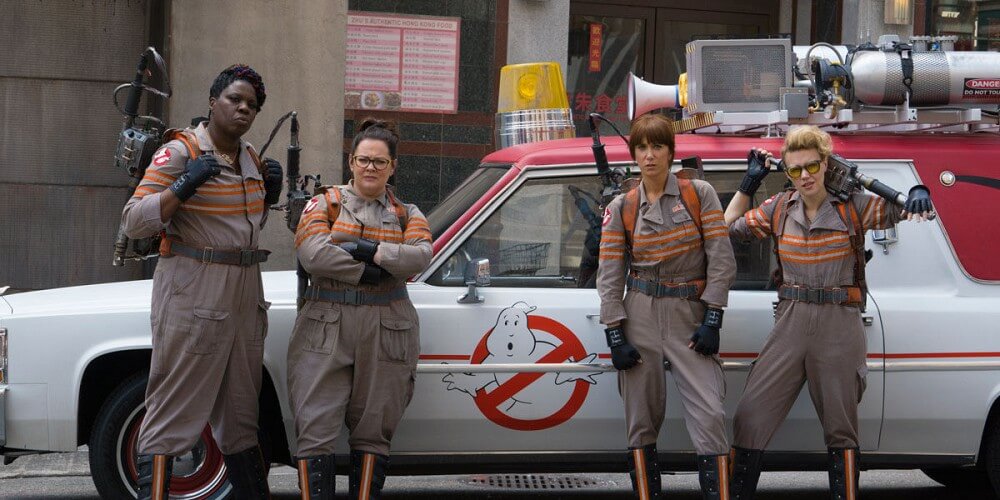 Sadly, but as expected, news that writer/director Paul Feig’s reboot of Ghostbusters would feature four women in the lead roles was met by the kind of childish misogyny that has come to exemplify the worst of the Internet. Fragile manbabies cursed with boundless insecurity and access to Wi-Fi have made hating this movie suffice for their lack of personality, intentionally tanking the film’s IMDB rating (before it was even released) and crusading in comments sections, which have long been sanctuaries for the cowardly and hate-filled. Ultimately, the best rejoinder to this legion of douchebros is the one Feig delivered: Ghostbusters is pretty damn good.

Cue the sad trombone for Men’s Rights Activists: Gone are the ghost blow jobs and dancing slime from the original films. Feig’s reboot begins in a New York City whose citizens know neither that the paranormal is popping off nor who to call when it does. Erin Gilbert (Kristen Wiig), a fusty academic, is up for tenure at her prestigious institution when she discovers her old friend, Abby Yates (Melissa McCarthy), has released an embarrassing book the pair co-wrote about scientific evidence regarding ghosts. Erin storms into Abby’s office to confront her, only to get strong-armed by Abby and her new partner, Jillian Holtzmann (Kate McKinnon), into going to a haunted mansion.

After seeing an-honest-to-goodness, slime-barfing lady ghost, the trio agree to work together and are soon joined by Patty Tolan (Leslie Jones), a history buff who forces her way onto the team. The squad hires a muscular mongoloid named Kevin (Chris Hemsworth) to man the phones and soon find themselves confronting a dangerous breach between the lands of the living and dead. Proton packs are engaged, Slimer shows up to throw hot dogs down his throat hallway and an epic battle against an oversized white dude not named Donald Trump ensues.

The four leads are magnificent. McCarthy reins in her increasingly all-used-up, over-the-top comedic bravado. Wiig is likeable and approachable as the film’s emotional core. Jones’ brash and savage style is deployed strategically to great effect. And McKinnon steals the show as a label-defying mad woman with the perfect blend of oddness and badassery. Sure, the climax is a big paint-by-numbers CGI cluster, but by then, the actresses have instilled such good will, it’s easy to let go and have fun.

The film’s shortcomings are predictable and understandable. It’s actually too beholden to the original, with no less than five cameos and scores of dialogue callbacks. The villain, although appropriately a loner dude willing to destroy everything because the world doesn’t make him feel like a special boy, is wholly forgettable and boring. Still, this is a film with a laser-guided purpose: establishing a new status quo and endearing us to our new ‘busters.

What Feig and company did by inverting gender expectations was create a reboot with intent and purpose, bringing a wholly new vibrancy and dynamic to expected events. Here’s hoping for a long-running series with this group, much to the chagrin of blubbering women-haters typing one-handed on Reddit.