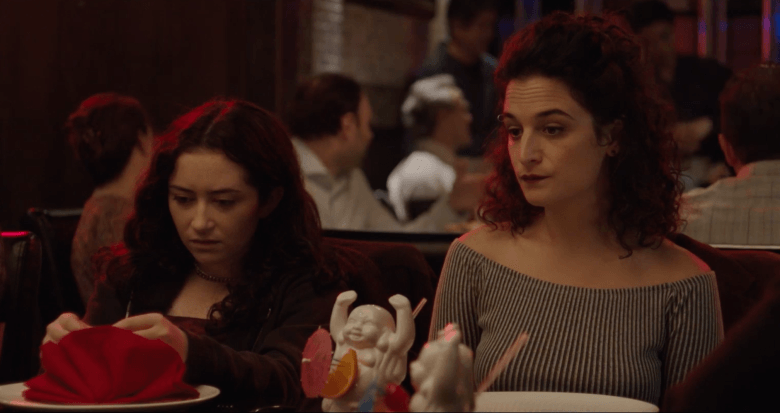 With apologies to Stranger Things, 1980s nostalgia is now presented with all the subtlety of Gilbert Gottfried doing a karaoke rendition of “Every Rose Has Its Thorn.” Maybe that’s why writer/director Gillian Robespierre’s Landline feels refreshingly delicate in how it uses its 1990s setting to make a simplistic drama feel like an authentic, pivotal memory. Intentionally nowhere near as brazen or audacious as her lauded debut, Obvious Child, Landline is a modestly amusing answer to the muttered “how did we get here” question about families asked by many thirty-to-fortysomethings in the present day. That answer, as almost everything does, has to do with people bumpin’ genitals.

The bulk of the film involves Ali coping with realistic coming-of-age questions like “how much drugs is too much drugs?” and “why is everyone in my family certifiably insane?” The paralleled infidelity of Dana and Alan prompts thoughts about whether character flaws are inherited, while Pat grapples with just how thoroughly to implode the family she largely single-handedly willed into order. None of these are glitzy concepts, but their hazy universality is enough for anyone watching to squint and recognize a family portrait that’s less Rockwell and more Rorschach.

As charismatic and effortlessly endearing as Slate always is, Quinn is a revelation here. Somehow likeable in her teenage brooding, Ali is trapped between a pessimism that echoes 2017 and idealism for an untapped future. Turturro and Falco are allotted far less screen time than the sisters, but maybe that’s because both performers are capable of doing so much with so little. Falco smokes a cigarette in a bathroom that silently holds the weight of a wordy monologue, and Turturro is unafraid to be unlikable as a mediocre putz who feels he’s owed more out of life.

Landline feels like a quality TV pilot for a cable-based or streaming-service family dramedy. Just like its 1990s setting, the film feels like a throwback to an era when such content was turned into movies and not binge-watched vehicles for former big-name stars. Because it feels smaller, quieter and less quirky by design, Robespierre’s flick may feel easily dismissible when it’s actually surprisingly resonant to anyone currently unpacking family baggage. Also, and perhaps most importantly, Landline is a reminder that white dudes looking to be cool have always had really, really stupid hair.