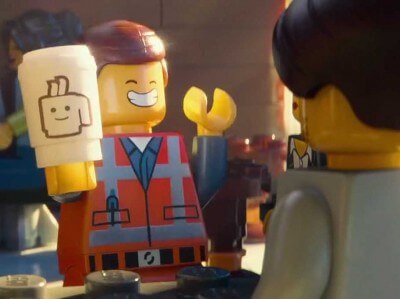 Writers/directors Phil Lord and Christopher Miller have stepped on the modern zeitgeist as forcefully as most of us have once stepped on the jagged foot-killers known as Lego blocks. The Lego Movie is kind of insane. Half the time, it operates on a critical meta-level—actually, sometimes it’s a meta-meta level—while lovingly embracing the spasticity of imaginative kids. The animation isn’t smooth like CGI or soft and staccato like Claymation. It’s twitchy and uneven, frenzied to a disorienting degree. And it’s beautiful in its batshit insanity.

When you buy the rights for The Lego Movie, it does not come with a story. Hell, it doesn’t even come with characters. Lord and Miller use that restriction to their advantage, choosing to take an absent storyline as a blank canvas. In essence, that’s what the movie becomes about: not following existing patterns.

Emmet Brickowoski (Chris Pratt) is a nondescript Lego dude. He’s a construction worker, which has to represent like 90% of all Lego job opportunities. When evil Lord Business (Will Ferrell) steals a weapon known as the “Kragl” from Vitruvius (Morgan Freeman), he sets out to destroy the world by freezing it in place. Luckily, Vitruvius speaks of a prophecy whereby a “Master Builder,” a fancy term for a Lego figure who doesn’t follow instructions, will save them using “The Missing Piece.”

Badass she-ninja Wildstyle (Elizabeth Banks), who dates Batman, meets Emmet on her way to find The Missing Piece. Of course, it’s Emmet who finds it and is determined to be “the chosen one,” in a sendup of every single epic story ever.  Thus, the average Emmet must join forces with a wild cadre of characters ranging from Superman (Channing Tatum) to a mutant hybrid of adorable called Unikitty (Alison Brie). And in the third act, things get real.

The Lego Movie is, first and foremost, hilarious. From Arnett’s Batman wooing Wildstyle with an emo song about how he’s an orphan to Charlie Day’s spaceship-obsessed astronaut, the movie never stops with the funny. The comedy here is satire, albeit satire of low-hanging fruit. The film blasts our homogenous, oblivious society’s capitalism and lack of innovation. At least it does so with breathless, visually unique animated action sequences.

Sadly, the end is too cloying. Worse yet, for a movie this progressive in some respects, it sucks that Wildstyle is reduced to being a female prize awarded to a dude for his heroism. Last week, the makers of Lego received a letter from a young girl asking why the construction toys seem to be less interested in targeting her gender. The Lego Movie won’t help, as it never features more than two female characters on screen at one time, unless you count Unikitty. Plus, the final message focuses on a son’s relationship with his father, so this omission seems dubious twice over.

Still, The Lego Movie is stupid fun to watch, hilarious in all the right ways and one of the most original animated blockbusters anyone has constructed in quite some time.