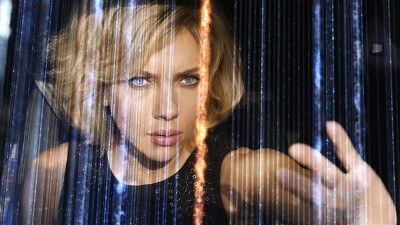 It doesn’t work this way with people, but there’s a level of confident stupidity a movie can display that makes it endearing. Lucy is that kind of stupid. Cocksure and confidently, it swaggers around, daring you to question any of the unimaginable number of scientific inaccuracies it hurls. You can practically hear writer/director Luc Besson just off screen whispering, “What are you gonna do, doubt our scientific mumbo jumbo when we’ve got Morgan friggin’ Freeman delivering exposition? He’s the voice of God. You must respect.”

The special kind of stupid that Lucy displays requires a simplistic framework upon which unrealistic and overreaching themes are placed. Lucy (Scarlett Johansson) is an American college student in China studying something or other. Her loser boyfriend of one week handcuffs a briefcase to her wrist and makes her deliver it to Mr. Jang (Min-sik Choi). Mr. Jang is an unpleasant fellow. He orders Lucy to be cut open and stuffed with a new illegal drug. When the container ruptures, the contents flood Lucy’s system.

But here’s the thing: it’s the most awesome drug ever. If you take enough of it, you become God. Or, as the pseudoscience in the movie incorrectly explains “you use 100% of your brain’s cerebral capacity.” For some reason, this allows you to move stuff with your mind and sometimes dissolve into a weird human cloud thing. Oh, and as far as overreaching on themes, Lucy tries to explain the origins of all known reality. How is that for bravado?

Again, it must be restated, none of this gobbledygook makes even the softest lick of sense. Lucy’s powers, evolution and motivations are abject nonsense by even the lowest standard. But Besson is so confident at the helm that he’s like a grand symphony conductor commanding musicians who are playing arm farts. He uses weird nonsensical flashes to metaphorical symbols, action that blatantly rips off The Matrix and a performance by Morgan Freeman that can only be described as “partly conscious.”

Science-fiction is supposed to be ambitious. So Besson can be legitimately forgiven for hubris when it comes to the more fantastic elements. Johansson helps matters by delivering a surprisingly controlled and genuine performance. Besson has always encouraged great delivery from his female leads. Once again the “tortured but eventually strengthened” woman motif emerges in his work, as it did with Natalie Portman in The Professional and Anne Parillaud in Le Femme Nikita. But as far as themes go, women moving from passive players in cruel male dominate worlds to unstoppable badasses isn’t exactly an overused theme in the patriarchal realm of cinema.

Look, Lucy is fun. Try to say it isn’t when Johansson is sending mercenaries flying through the air with a flick of her wrist. It’s not “good,” which is to say it isn’t an exemplary film, but it’s fun. It is confidently dumb, defiantly moronic and a fine way to spend 90 minutes of time before doing something of value.