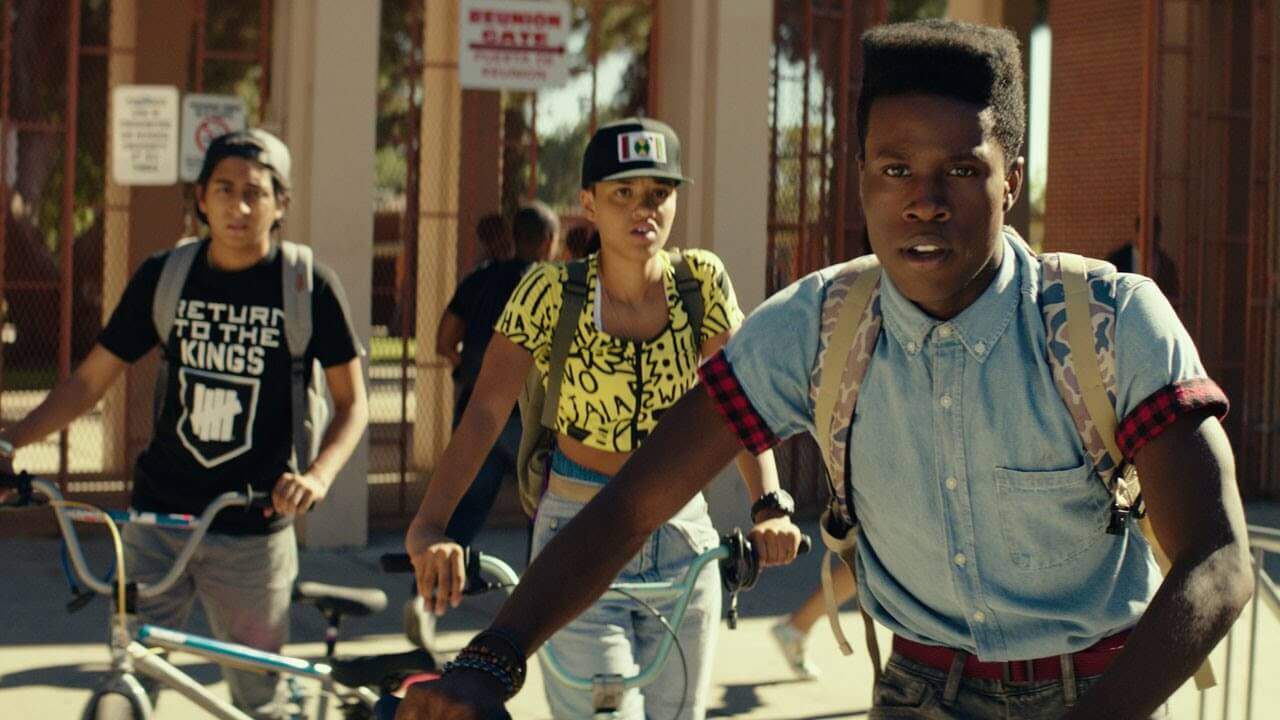 I’m not going to take any chances by coming at this in clever fashion: Go see Dope. See it now. See it and reward filmmakers speaking truth and passionately reminding us that unique and original voices are the soul of cinema. If Jurassic World is how the industry makes its living, Dope is what it lives for. It doesn’t matter whether or not the characters in the film look like you or the setting is familiar to your experiences. You’ll either relate to it firsthand or love the shit out of it secondhand. Either way, Dope is for you. Yes, you.

Dope is set in the present day, but you wouldn’t know it to look at Malcolm (Shameik Moore). Rocking a hi-top fade and leftovers from the factory that used to make Hammer-pants, Malcolm is as obsessed with 90s-era hip-hop as he is with getting in to Harvard. That latter obsession isn’t a common one in Inglewood, California, where gangsters stealing your shoes at school is considered an average day. Malcolm is lucky to have two BFFs: Diggy (Kiersey Clemons), a whip-smart lesbian, and Jib (Tony Revolori), who gets to use the N-word because he’s 14% black according to Ancestry.com.

When the stunning Nakia (Zoë Kravitz) invites Malcolm to a birthday party for her on-again/off-again, dope-slinging boyfriend, Dom (A$ap Rocky), the nerdy good kids find themselves wading hip deep into shit creek. Malcolm gets stuck with a backpack full of molly and finds himself confronted with gangbangers, drug-dealing kingpins and the Internet’s black market. Yes, you read that last one right; Dope is the first movie to make Bitcoins a plot point.

Writer/director Rick Famuyiwa’s movie is goddamn invigorating. From Malcolm’s self-awareness to Diggy’s playful elaboration on the parameters of who can drop N-bombs without consequence, Dope is, above all else, smart. It’s also fearless, as Famuyiwa ignores convention and bobs and weaves through various genres in the span of a single scene. Dope hilariously satirizes the “black witness” on local news, skewers stereotypical expectations and is likely the funniest movie I’ve seen so far this year.

Ambitious filmmaking gets sloppy sometimes. The Nakia/Malcolm relationship isn’t just woefully underdeveloped, it’s laughably nonexistent, so revisiting that in the conclusion felt decidedly wrong. What makes it worse is that Famuyiwa has a fist-pumping, mic-dropping moment not five minutes before that, as Malcolm delivers his Harvard admission essay in something that resembles spoken word poetry and ends on a high-note so palpable that the small crowd I was with erupted. Ending on that note would have been epic.

Still, we have come here to praise Dope, not to bury it. Give me a joyful, genuine piece of cinematic fiction with a few warts over calculated filmmaking-by-numbers any day of the week. Jam-packed with fantastic characters and performances, a soundtrack that may jockey with Guardians of the Galaxy’s for bragging rights and thoughtful social commentary, Dope made my heart hurt I loved it so much. So please, see it. See it right now.