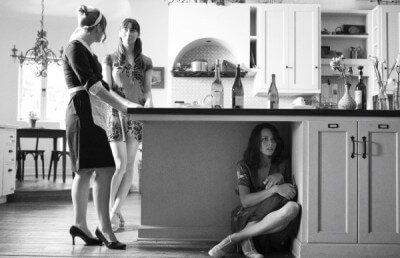 Are you supposed to review the screenplay in a movie that uses Shakespeare’s original words? Can characters be formulaic and derivative if the writer is the dude who originally derived the formula? Executive decision: Let’s leave The Bard alone and talk about The Beard, which is a nickname no one has ever used for writer/director/lord-of-nerds Joss Whedon but it was a nice parallel and maybe it will stick.

The Avengers, his last movie (“his” being Whedon’s, not Shakespeare’s) became the highest-grossing, non-James Cameron movie in the history of the world and thus is the most successful movie Kathryn Bigelow can still watch. As a palate-cleanser after that budget-busting behemoth, Whedon and pals whipped up a black-and-white take on an Elizabethan comedy of love, deceit and social posturing filmed at Whedon’s mansion. He arrived at this decision during one of the many casual Shakespeare readings he and his actor friends have held during parties. Apparently, rich people have never heard of beer pong.

Whedon’s Much Ado About Nothing is, as the original, slight but charming. Nowhere near endowed with the gender investigations of “Taming of the Shrew,” the love-struck whimsy of “Midsummer Night’s Dream” or the social standing issues of “Othello,” it does drunkely flirt with a few of those points. Whedon likely chose it because its tone closely mirrors his own work: comedic, heavily invested in relationships, prone to the occasional bout of seriousness and able to provide a role for Nathan Fillion.

The setting is present day in the large estate of Leonato (Clark Gregg), whose daughter Hero (Jillian Morgese) is twitter-pated with the soldier Claudio (Fran Kranz). Leonato’s niece, Beatrice (Amy Acker), is all sorts of love/hate with Claudio’s pal Benedick (Alexis Denisof), whose frequently displeasing personality means his name sounds like how most people describe how he’s been acting. Claudio and Benedick are in the service of the prince Don Pedro (Reed Diamond), whose illegitimate brother, Don John (Sean Maher), is a sullen troublemaker. As Benedick and Beatrice flirt and fight with witticisms, Claudio and Hero get engaged and get trapped in Don John’s trickeration, thwarted only by the lawman Dogberry (Fillion). And the whole time you’ll be thinking, “Holy crap, Joss Whedon’s house is big.”

If you’re so predisposed, there’s no world where watching Whedon and his go-to actor pals goof around with Shakespeare is not painfully adorable. Acker, whose lack of uber-fame is still impossible to explain, is as perfect a Beatrice as ever stepped on the Globe stage. Denisof is serviceable as Benedick, but Acker’s juju is so powerful the pairing keeps the film’s epicenter in place. Sure, there’s some clever camera gags, a few delightful modern setting-meets-old world jokes and loads of charm, but the film is largely uneventful in its pleasing distraction. The take-home message to this retold tale of social grace is this: talented wealthy people apparently stage fairly adorable Shakespearean recreations as a way to blow off steam. Not exactly a beer after a hard day’s work, huh?