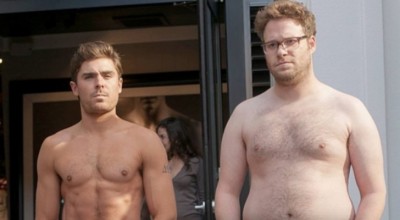 Let’s start with something that’s apparently really, really hard for edgy comedy people to grasp: jokes about rape or the N-word suck, and you suck for using them. Yes, you are allowed to make them; they aren’t illegal or anything. But saying “nothing is off-limits in comedy” makes you sound like a pretentious wang who thinks humor is some kind of miracle drug. Laughter isn’t literally “the best medicine,” so until a rape or race jokes cure cancer, feel free to knock it off, jagwagons.

To recap: If you want to be edgy, feel free to wrap a huge human dong around someone’s neck like a necklace or show frat boys making dildos out of their own members, both of which are featured in the wholesome R-rated comedy Neighbors. But do not have generally likable white comedian Ike Barinholtz use rape as a punchline and drop two N-bombs (one of them while doing a President Obama impression). Don’t worry; these three jokes do not form the entire basis of my reaction to the film, which is generally pretty funny, even if it is a cut below much of this group’s last outing, This is the End. I’ve just had it with the national dialogue on whether certain things are funny. They’re not, and you’re stupid if you think so.

It probably seems like that was a lot of time spent on one tiny aspect of Neighbors, but there’s really not much going on here. Mac (Seth Rogen) and Kelly (Rose Byrne) are new parents who square off against the frat that moves in next door, led by Teddy (Zac Efron) and Pete (Dave Franco). While the couple initially tries to be cool and cling to their youth, engaging in hallucinogenic shenanigans before reminding the youngsters to “keep it down,” they quickly begin assaulting one another with increasingly immoral actions. Oh, and there is a killer lactation scene.

The funniest part of watching Rogen play a man-child finally forced to grow up is realizing that he probably only has a few years left during which he can play an underachieving stoner before that character goes from comedic to tragic. Watching him and Byrne run full-speed into the brick wall of uncoolness that awaits all of us is an interesting comedic viewpoint rarely explored. Also refreshing is Efron’s willingness to go “full A-hole.” His drunken self-entitlement and loose grasp on reality evokes images of real-life spoiled young celebrities, who will remain nameless until Rogen calls them names on the Howard Stern show.

The problem with Neighbors is that it isn’t quite as funny as it needs to be to buoy such a simplistic premise. The supporting cast is fairly horrid, including Barinholtz in specific, and the tone shifts too often between realistic and ridiculous. Still, Byrne is a show-stealing riot, and the whole debacle is funny enough to count as light, giggly summer fluff. Hopefully, the next time Rogen and his regulars get together, they’ll pack more pound-for-pound laughs, ditch the faux-edgy tasteless quips and keep all the other raunch they want.