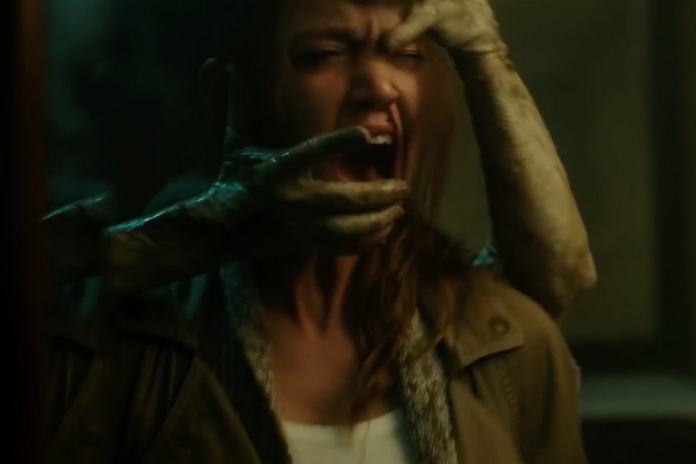 With the Trump administration playing a nonstop game of “Hide and Go Seek Your Civil Rights,” scary movies have to try harder to achieve even the same basic level of terror as a casual scroll through Twitter. Sadly, Rings doesn’t try. Like, at all. A disjointed retread of the The Ring co-written by the mastermind behind Batman & Robin, this half-sequel/half-remake is all kinds of stupid and boring. The cleverest thing it does is name its tiny-nippled, brotastic, generic white male lead “Holt.” Odds are that somewhere in the South, there’s probably a whole fraternity in which every single dude is named Holt. These are the sort of thoughts you have time to think while waiting for Rings to end.

The female lead is a nondescript, personality-free, human-shaped creature named Julia, played by Matilda Anna Ingrid Lutz. It’s important to know that Lutz is an Italian actress, because not knowing that means you spend the whole of Rings trying to decide if she has an accent or if you’ve become so bored that all words suddenly sound strange when people say them out loud. Holt (Alex Roe) presumably takes time off from flexing in the mirror and posting his thoughts about feminism in online comments sections to go to college, where his professor is the guy from “The Big Bang Theory” (Johnny Galecki). He’s probably not playing the same character as in the CBS sitcom, but it’s far more entertaining to believe he is.

“Big Bang” oaf shows some students the video of Samara, the emo water ghost who lives in a well and crawls out of electronic screens 7 days after you watch the French student film she made. You may remember that they already wrapped up her story in a previous movie, but you may also remember lots of things while watching Rings. Things like how it felt to be alive or what being entertained felt like. Julia and Holt, who seems destined to sexually disappoint women and hold political office, soon find themselves in a small town trying to escape what feels like a particularly bad episode of the CW’s “Supernatural.”

A revisiting of The Ring actually made some measure of sense in an era of viral videos. A bit of creativity could have crafted a kitschy metaphor about the toxic danger of our ignorant media consumption, some kind of spooky meditation on our unwillingness to think before we consume. But nah, this is a movie that just wants to chain more women inside sex dungeon basements. The horror genre may not technically glamorize the practice of torturing ladies, but its incessant, uninspired, gross use of the trope sure does desensitize it. So, basically, everything sucks. The end.

With everyone pissed off and profoundly fatigued about the state of affairs in America, our entertainment should, at worst, be a much-needed distraction and, at best, serve as an educational and empathetic experience. Rings is neither: It’s a dank turd floating at the bottom of a well.