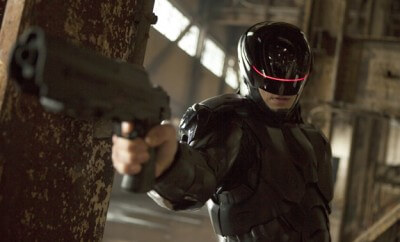 For one brief, shining moment, the completely unnecessary remake of Robocop suggested the possibility of non-suckage. Pat Novak (Samuel L. Jackson), a host of cable news propaganda, frothily and non-ironically suggests using the same drone-based military action we use abroad to curb violence at home. Suddenly, this Robocop appeared to have a purpose: skewering American apathy about machines dispensing death overseas. Could it be? Could writer Joshua Zetumer and director José Padilha have stumbled upon a way to justify the existence of this cash grab? Nope.

At least, if they did, studio suits apparently put the cyber-kibosh on it, demanding the film jettison original concepts in favor of tepid, imagination- and blood-free PG-13 action. To add insult to injurious boredom, the cast is pretty much spot on. Relative newcomer Joel Kinnaman is fairly remarkable as the titular tin man. And then there’s Gary Oldman’s earnestly conflicted scientist, Dr. Dennett Norton; Michael Keaton’s greedy but believable CEO, Ramond Sellars; Jackie Earle Haley’s delightfully angry foil, Rick Mattox; and Michael K. Williams’ savvy buddy cop, Jack Lewis. It’s almost as if someone came running in at the last minute reminded everyone this was supposed to be a bad movie.

The plot is even more gossamer this time out than when Paul Verhoeven brilliantly abused the concept in 1987. Alex Murphy (Kinnaman) is a good cop in a dirty cesspool who gets blown up when he tries to stop a crimelord. Sellars is desperate for his company to crack the U.S. security market, so he convinces Norton to turn what’s left of Murphy into an organic-based drone in order to win over the public. Once reborn in bulky metal, Murphy attempts to solve his own murder and runs afoul of the company that owns him. That really shouldn’t take very long; in fact, that should be the first half hour or so. But Robocop stretches this into nearly two hours of angsty cyborg tears.

Aside from the decision to relegate the insightful and challenging drone content to Jackson’s sporadic monologues, the worst decision was to ixnay the satirical comedy of the original film. Padilha and company could have done one or the other, choosing to seriously tackle American hypocrisy or comedically deploy robo-action. But doing both makes the whole thing feel completely inert. That’s not the same thing as outright “bad,” but it feels twice as frustrating to know that even while all the components were there, nobody could put Robocop together again.

Easily the best bit in the new version is a sick little body horror sequence where we see “what’s left” of Mr. Murphy’s actual body. It’s so gross and absurd that laughter seems both totally appropriate and totally insensitive. And that unique feeling is the one the original Robocop capitalized on but this one largely ignores. We’ll never know who is to blame for this hunk of junk, but it doesn’t feel like any of the creative types. A film about a guy in a suit was ruined by guys in suits. Somebody help: is that ironic?