Home » Film » SeaWorld Can Suck It 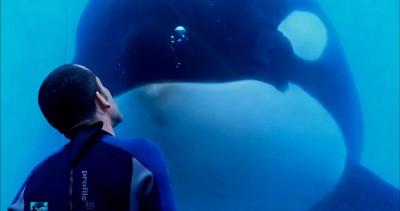 Breaking news: You know those giant, majestic, ocean-dwelling creatures with the first name “killer?” Turns out if you lock them in tiny spaces it kills them, and if you get in with them they kill you. Nothing says “family fun” like aquatic murder and animal mistreatment, right SeaWorld?

Blackfish is less a documentary and more a 83-minute hit job on the aforementioned tourist attraction. Writer/director Gabriela Cowperthwaite and cowriter Eli B. Despres gather a murderer’s row of eye witnesses, mostly former trainers, to describe in explicit detail how explicitly messed up things are at SeaWorld, further besmirching Florida’s routinely besmirched reputation.

The film primarily focuses on one whale: Tilikum. Why focus on this one whale? Well, because he’s basically a serial killer whale, having caused the death of three separate trainers on three separate occasions. You’d think that the acceptable limit for whale murder would be somewhere around zero, but SeaWorld guidelines are apparently a bit lax. The most well-known victim was Dawn Brancheau, a widely respected trainer beloved by her coworkers. If you think the anti-SeaWorld message is a bit harsh, consider that after Dawn was killed, the corporation tried to say it was her fault for “wearing a ponytail.” Nevermind that Tilikum didn’t grab her by her ponytail and that the hairstyle is acceptable for trainers.

This mimics earlier deaths, where the blame was shifted onto the human in the water and not the giant sea creature that totally shouldn’t be there. Almost as bad as making it sound like their employees died due to their own negligence: SeaWorld worked to spread lies about killer whales to make themselves look better. They’d say they lived longer in captivity when they lived half as long or that “dorsal fin collapse” as is seen in almost every captive male orca is common when it happens in less than 1% in the wild.

In case you hadn’t picked up on it, there’s no overall narrative flow to Blackfish. The film also haphazardly skips in chronology, while spending far too little time examining the titular creature. While nobody can blame Cowperthwaite for not turning this into a National Geographic special, it would have been refreshing to at least see how the free-roaming creatures live. And then there’s the other problem: when creating a movie intended to destroy the reputation of a corporation, that corporation is not very prone to let you use their materials or images. Thus, as expected, there are a lot of holes in information and a ton of blurry, VHS-recorded footage.

It’s almost impossible to watch Blackfish and not get at least kind of pissed. Unless you’re someone who just really, truly hates all gentle living creatures in this world. If that’s the case, please stop reading this review and seek treatment. If the film were any longer, it may have fallen into the abyss of repetition, as chances are audiences will be ready to boycott SeaWorld after 15 minutes. Thankfully, the super specific focus is accompanied by a super tight running time, and the result is an effective destruction of a corporation that sure deserved it.