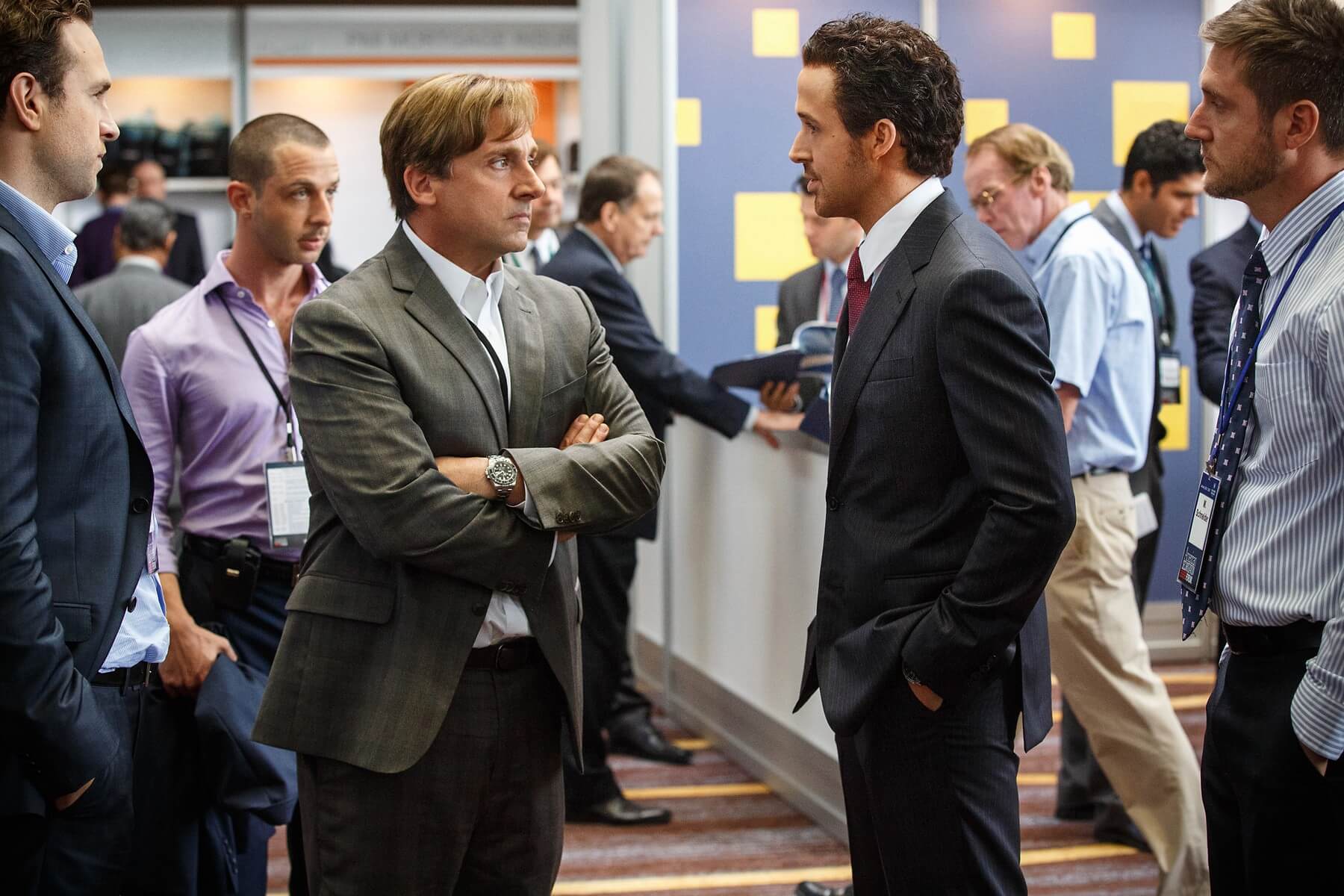 About a decade ago, a bunch of rich assholes collapsed the world’s economy because they were dumb, evil and greedy. They didn’t go to jail, not because they weren’t icky bad criminals, but because their crimes were boring and hard to understand. You rob a bank with a gun, you go to jail. You rob all the banks in the world with bundled subprime mortgages, the government will cover your IOUs. The Big Short is an attempt to explain what went down in the most pleasing way possible, hence the inclusion of Ryan Gosling and Margot Robbie.

Picking up a few years before the housing market made a diaper deposit, writer/director Adam McKay’s film focuses on the few folks who saw the collapse coming. Michael Burry (Christian Bale), an MD-turned-investor, is depicted as a one-eyed kook who never wears shoes, rocks out to metal at all times and saw the crisis coming by actually reading what was in the mortgages being traded. Mark Baum (Steve Carell), a cynical investor whose brother had recently killed himself, was on the right side of the housing bubble bursting because he distrusted everyone in charge of everything. Jamie Shipley (Finn Wittrock) and Charlie Geller (John Magaro) took positions against home values because their small firm philosophy was predicated on investing in “bad things nobody wants to think about.”

The crux of what constitutes the film’s “action” involves Jared Vennett (Gosling) peddling the sale of “credit default swaps” to Baum. Meanwhile, Burry waits to see if his prediction pays off and Shipley and Geller convince former trader Ben Rickert (Brad Pitt) to help them invest their money. McKay spices things up as much as humanly possible, complete with Selena Gomez and Anthony Bourdain explaining complex banking issues with metaphors and sex appeal. I’ll let you decide which celeb went with which strategy.

The Big Short is a really weird, detached way to come at the crisis. It neither focuses on the criminals who ruined everything nor the victims who paid for it. It’s odd that one of the few major works of pop culture to really engage the most significant financial event of the last century did so by examining those who actually came out ahead after the fan was introduced to the shit. At one point, Rickert tears Shipley and Geller apart for celebrating their investment, but that could well have been a condemnation made of McKay and his film too.

That said, it’s rare to be both substantive and entertaining, and The Big Short manages both. You’ll leave with both a firm understanding of tranche-bundled CODs and a strange fascination with Carell’s wig. What’s lacking in empathy and pathos for real-life victims of the collapse is made up for in eccentric character work and high-level oversight of the entirety of the situation. Oh, and for the second time this year (the first being Suffragette), what stuck with me most was the text at the end of the film, which mentions Burry’s current investment positions involve water shortage. Eek.