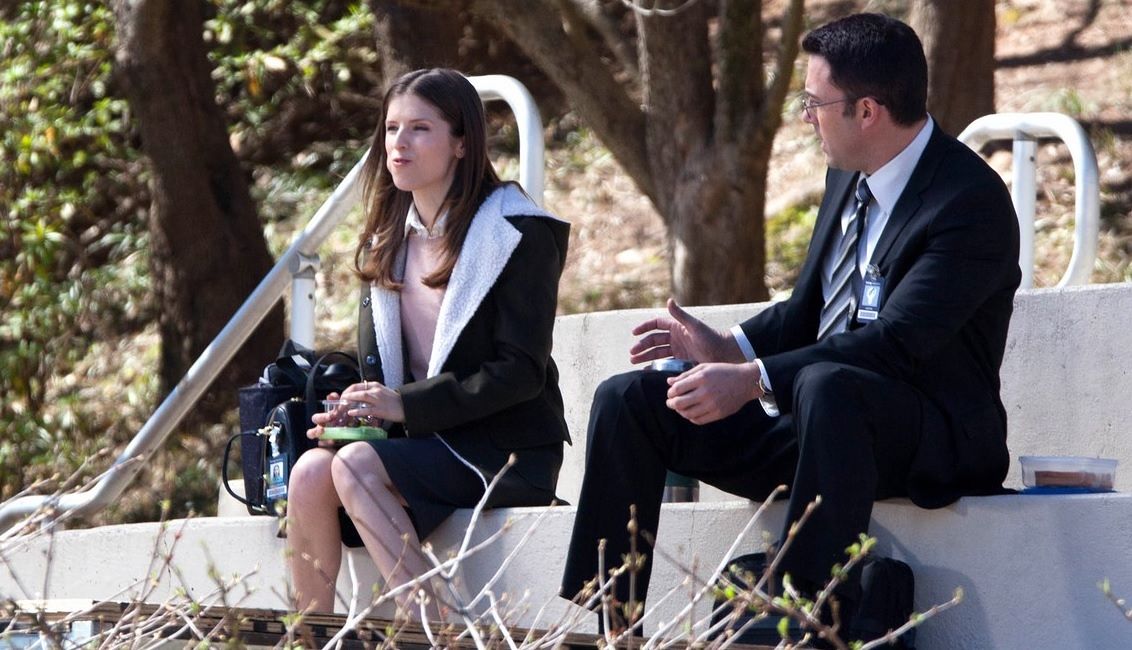 Like many of my favorite scenes from The Accountant, the best one never actually happens.

Having just watched hunky dreamboat/obvious-serial-killer accountant Christian “Yeah baby, those are two Fs in my last name” Wolff (Ben Affleck) murder the shit out of some people, plucky number-cruncher Dana Cummings (Anna Kendrick) finds herself in Christian’s emergency getaway mobile home. Stunned by the staggering amount of penis substitutes, sorry…guns, Dana drools out a slack-jawed “Who are you?” before immediately pulling herself together to ask if that’s a real Jackson Pollock painting.

Thus, the best scene that never happens is Dana on her cell phone, chattin’ up her bestie: “Okay, so don’t freak, but I totally just met a guy… He’s super cute, draws numbers on walls, has really great taste in art and killed something like four people for me.”

The Accountant stinks with the odor of got-your-nose cleverness, telegraphing plot points in anticipation of a “No effing way!!” reaction that no effing person watching will ever have. What’s infinitely worse, the film manages to torpedo the autistic community in stultifying fashion, envisioning itself as woke pop culture escapism when it really traffics in the same insulting stereotypical sticks and stones that have long been thrown. Oh, and the second scene is a 100%-irrelevant sequence in which a woman of color is shamed into doing her job, as though simply having her be motivated to do said job requires an impossible suspension of disbelief.

Like a friend who leaves unread copies of complicated books lying around to seem smart, The Accountant litters itself with busywork to seem sophisticated. But basically, Christian’s asshole Army dad abused him and his brother via violent martial arts training and wound up creating Autistic Batman. Now, Christian helps terrorists and gangsters balance their books, leading agent Ray King (J.K. Simmons) to track him down. Well, it leads King to convince highly competent fellow Department of Treasury employee Marybeth Medina (Cynthia Addai-Robinson) to track Christian down, or else King will reveal that she has a gun tattooed near her no-no parts and once almost killed a drug dealer “back in da hood.”

Christian gets called in to help find missing money for a robotics company run by Lamar Black (John Lithgow). Before Christian can finish his investigation, a dickbag assassin named Brax (Jon Bernthal) murderfies the likely thief. If you can figure out who Brax is before the last 15 minutes, congrats on being smarter than screenwriter Bill Dubuque thinks you are. Actually, no matter what, you’re smarter than Bill Dubuque thinks you are.

The scenes with Kendrick and Affleck are actually quite pleasant. Sadly, there are only 2-3 of them before she is whisked away into exposition oblivion. For his part, Affleck is clearly trying very hard. Good for you! Good for you, Ben Affleck!! And yet, in a movie this impossibly stupid, having likeable people try hard only kind of makes things awkward.

This isn’t on you, Anna and Ben. You hear me? You tried good. You both tried real, real good. Everyone else? Go sit in the corner and mumble rhymes and math equations until we forget you exist.