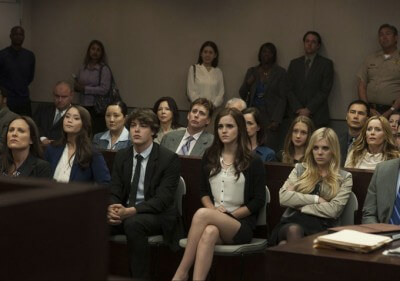 Writer/director Sofia Coppola has made a movie that says nothing about people with nothing interesting to offer who steal from famous people who do nothing to be famous. And unless you’re a talk-show conspiracy theorist, it’s kind of hard to get too worked up about that much nothing. Playing like the slow, dull sister of Spring Breakers, The Bling Ring exchanges neon decadence and teen sinning for vacant crimes of boredom. The take home message here isn’t an indictment of modern celebu-worship so much as it is “eh, whatever.”

Coppola, whose Lost in Translation gets her a lifetime benefit of the doubt, waxed lazily narcissistic with her wretched last film, Somewhere. At least the muted approach makes sense here, as the approach matches the makeup of her characters. Rebecca (Katie Chang), Marc (Israel Broussard), Nicki (Emma Watson) and Chloe (Claire Julien) break in to the homes of the rich and shameless (Paris Hilton, Lindsay Lohan) and take stuff. Then they post pictures of them wearing the stuff they took. Then they take more stuff. This isn’t some wealth transference fetish; the young criminals are all well off. It’s not even some kind of weird celebrity idolization or shaming, even if Hilton takes her fair share of verbal barbs as they loot her “crib.” It’s just something to do…until they get caught.

The fact that The Bling Ring is based on real events should have provided more fodder to fuel these characters, leaving only two possibilities: Coppola intentionally kept her thieves vacant on purpose or (gasp) the real-life malcontents were little more than kleptomaniac mannequins. Not every film has to make a point, but every film should have a point, and this one doesn’t. What it does have is an against-type performance by Watson that doggy paddles the film’s nose just above water. Her beautifully empty moron is a combination of every person you wish had never talked to you and every object of affection who never would.

Even without director Harmony Korine’s Spring Breakers as a counterpoint, The Bling Ring would have felt marginal. With it, the latter film becomes as unnecessary as male nipples. Coppola isn’t criticizing celebrity celebration or condemning the American fascination with every mundane aspect of famous people. She isn’t criticizing the famous people either. She isn’t really doing much of anything, as the film cycles and recycles through suspenseless, tension-free repetitive burglaries. Hell, finding enough to say about the film to fill a review is even difficult.

Her last name may have afforded her the opportunity to get into the industry, but make no mistake about it: Sofia Coppola is remarkably talented. Specifically, she is a talented female director in an industry that is seemingly phobic of allowing creative, capable women anywhere near the camera. Were she a lackadaisical male auteur making piffle like this, she’d probably be given infinite free passes. As it stand, she’d probably best use her next opportunity to say something a bit more exciting, a bit more substantive, a bit more…than absolutely nothing.