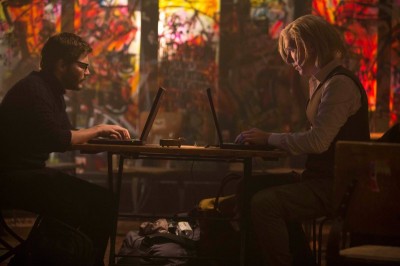 Seeing as how IRL, nobody can stop typing on various devices long enough to talk to each other with their mouth parts, why make a movie that could be called Watch ‘em Type? The Fifth Estate is Keystrokes: The Movie, a flat, dull, repetitive dud made modestly palatable because nobody doesn’t like the taste of Benedict Cumberbatch, the British treat.

You could make an interesting movie about Julian Assange (Cumberbatch), the real-life, albino-haired traitor/hero who demands institutional accountability and justice for the little guy while maybe raping multiple women. But they didn’t. Instead, director Bill Condon delivers a “vanilla thrilla” movie based on two books, a Taoistic reaction to his having split Twilight: Breaking Dawn into two movies from one book

We are introduced to Assange through Daniel Berg (Daniel Brühl), whose real-life counterpart was the WikiLeaks’ creator’s right-hand man and then enemy. Both men want the world to be a better place and for governments to stop, you know, accidentally murdering innocent people and covering it up. But Assange is willing to play dirty, to take risks with other people’s lives by revealing information that may put them in harm’s way. And it’s not because he’s a humanitarian, it’s because he wants to be the man who saves the world.

As the film’s one true bright spot, Cumberbatch is more than up to the task of taking the Assange role past impressionism, although his voice and mannerisms are frighteningly well matched to the real person’s. And Brühl is perfectly root-for-able as the radical with a better sense of reason. But their interaction never feels right; it’s never intimate enough to explain their bond and never adversarial enough to emotionally explain Berg’s final actions. Worse yet, the movie’s refusal to take a stance on Assange is easily the most boring way to approach the subject.

For the first half, he’s Robin Hood; in the second half, he’s The Joker. But saying “you decide” to the audience is lazy storytelling sometimes, and it negates the purpose of making this film. We already know the real evidence and can decide for ourselves; so, howsabout you show us what you decided, people who did more research? Condon tries to spice things up with shaky cam and scenes where the characters go into their own minds, but there’s only so many times you can quickly circle around a guy on his laptop before you get nauseous. Without a script from Aaron Sorkin, The Fifth Estate became the movie we feared The Social Network would be.

And one last thing: the rape charges against Assange have not been proven (mostly because he refuses to stand trial). But to shuffle such a major part of his personal story to text at the end of the film, especially when said text points out a blatant lie he made about the accusations, seems like a lie of omission. You can’t make a character study of a man with this many secrets and you can’t make a thriller out of people typing.