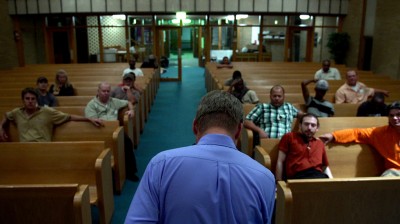 Most praise for writer/director Jesse Moss’s documentary, The Overnighters, has rightly been focused on its Steinbeckian nature and explosive revelations about struggling workers in North Dakota. That wasn’t the big takeaway for me. The big takeaway for me was how brutal the burden is for those who truly embrace the core conceits of the Christian faith and its insistence upon caring for any and all who need help, no matter the sins of their past. It is a colossal, almost unfair expectation of kindness and invites the kind of hypocrisy The Overnighters wallows in.

The first shock-and-awe moment comes early: People are moving to North Dakota on purpose. The town of Williston is one of many North Dakotan locales blessed and cursed with the “oil boom.” They call it an “oil boom” because “fracking the planet into oblivion” doesn’t sound as fun. Blue collar workers from around the country left struggling during the recession have flocked north to acquire high-paying labor jobs. Except, there’s not enough for all of them. Heck, there’s not even enough space to put all these migrants.

Enter Pastor Jay Reinke. Saddled with the aforementioned yoke of Christian responsibility, Reinke sees this influx of sad, broken souls as an opportunity to spread God’s will and embrace his fellow man. Much to his congregation’s chagrin, he opens the parking lot nightly to workers sleeping in their cars and offers his church floor to those without vehicles. He even offers his own home to a former convict who found work as a trucker. As expected, the strain on the community begins to turn locals against the newcomers and against the man who would be their shepherd. When accusations begin to surface about sex offenders staying at the church, all hell breaks loose.

From the opening frames of Moss’s film, it is obvious he does not want to deify Reinke. That doesn’t lessen the shock of the final moments, but it helps prevent the film from being a two-hour celebration of a flawed pastor. We don’t spend long with many specific workers. In fact, I’d be hard pressed to remember any of their names. But that’s almost the point, as the sea of faces smeared with dirt and tears, speaking nearly the same story of poverty and personal strife, becomes a relentless blur.

The Overnighters is judgement-free of its subjects, including Reinke. Every time the balance is about to tip into outright sympathy he or others make a choice or reveal a fact of their past that muddies things. These men deserve compassion, yes, but redemption? Is that earned or inherently owed? There are no answers here, only questions, but the best documentaries are filmed in the gray shadows and spaces between asking and answering.

The maddening, realistic, frustrating, understandable ending to the film is a jaw-dropper. Instead of a take-home message, audiences are left scrambling to reconcile the choices Reinke made with the content of his character. Between that and the confusion of how to handle the broken, dirty laborers just trying to work for a living and trying to just live, The Overnighters will be sticking in your thoughts for quite some time.