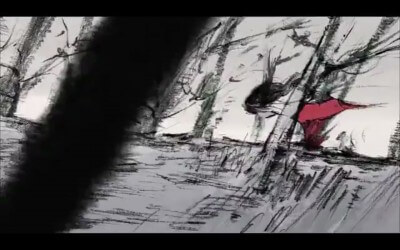 Actual human beings made The Tale of Princess Kaguya, and you can tell. A water-colored rebuke of the robots who computer-generate most modern animation, every luscious scene is hand-crafted and flippin’ gorgeous. Sadly, the story is painted with obvious and familiar strokes, riffing on cliched fairy tale themes about independence and empowerment that fail the visual artistry. The result is a pleasing, if bloated and simplistic, experience destined to be overpraised because of its lauded creative team.

Writer/director Isao Takahata adapts a Japanese folktale called “The Tale of the Bamboo Cutter.” While unsurprisingly out cutting bamboo, the Bamboo Cutter discovers a surprise inside of one stalk: a tiny fairy creature that turns into a baby. Just go with it. The Bamboo Cutter and his wife are childless, so they figure, “Hey, free baby!” They name her Princess because of course they do.

When the Bamboo Cutter discovers a vast amount of wealth, he pays to have his adopted bamboo-daughter made into royalty. Renamed Princess Kaguya, the newly minted royal member balks when confronted with a set of suitors. Luckily, she’s kinda clever; when they praise her beauty by comparing her to mythical objects, she agrees to marry the one who can actually produce the mythical object to which they referred. Turns out, it’s not easy to get the jewel a dragon wears around his neck. From there, the film shifts into an allegedly philosophical rumination on joy and independence that is really more in line with the moral at the end of a non-special episode of “Full House.”

If it hasn’t been reiterated enough, let’s do so again: Kaguya is spectacular to look at. Scenes where Princess Kaguya runs, trailing colorful and detailed clothes behind her, are so kinetic and gorgeous, it almost doesn’t matter where she’s running to. Almost… The problem is Princess Kaguya herself is kind of a dud. Aside from her clever move with the men pursuing her, the only other definitive characteristic she displays is a love of plants and bugs, which is understandable having been birthed inside a bamboo stalk.

The praise heaped upon the film is understandable, but only if mainstream American fare is used as the barometer. Other than the unique artistic approach, this inarguably counts as one of Studio Ghibli’s lesser works, failing to embody the imaginative legacy of Hayao Miyazaki. When the film does spill into the purely fantastic, it soars…quite literally. But much of the running time is spent on characters reacting with wide-eyed “huh” expressions to explicitly non-shocking content.

Look, traditional folklore tales weren’t exactly known for nuance and depth of intellect. They were quick, concise morality suggestions easily consumed but only briefly considered. In that sense, The Tale of Princess Kaguya does its ancestor proud, as it is pleasant but slight, beautiful but fleeting. That it outpaces puerile American tripe doesn’t mean it should be hailed as more than it is. It’s full of happy little watercolor clouds and trees but little lasting significance.