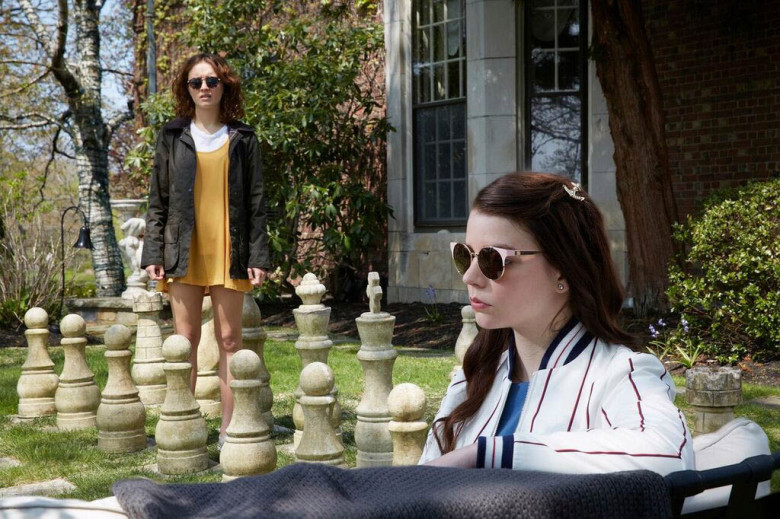 Oftentimes, films determined to be quirky and fun actually come off as little more than overconfident jackassery, a condition now known as Baby Driver-itis. Writer/director Cory Finley’s Thoroughbreds had all the recognized risk factors for the development of Baby Driver-itis, ranging from its “American Psycho meets Heathers” description to marketing that felt like the equivalent of social media videos that begin with “You guys!” Thankfully, the power of a pitch-perfect pairing of actresses and Finley flexing just enough willpower makes Thoroughbreds a deft bit of black comedy that gleefully skewers glossy white teen privilege.

The plot is as thin as the unnecessarily sexualized outfits Finley and company insisted on dressing one of its leads in. Lily (Anya Taylor-Joy) hates her stepdad, Mark (Paul Sparks). If you ground up the personalities of every fired Trump White House member and molded the chum into a meat person, that meat person would be Mark. So Amanda (Olivia Cooke)—Lily’s former childhood friend who is now a social pariah because she killed her own horse with a knife—suggests they kill Mark dead. They recruit/blackmail the only criminal they know, a sketchy low-level drug dealer named Tim (Anton Yelchin), but things don’t quite go according to plan. Nor do things take long to wrap up in this applaudably lithe, quick little dark ditty.

The degree of authenticity in Cooke’s depiction of sociopathy is likely a matter of debate. That being said, for purely entertainment purposes, her drolly chewed dialogue and languid looks are simply divine. Taylor-Joy has a more thankless role, but her transformation from doe-eyed tutor to madly malevolent monarch provides its own kind of delight. Yelchin, in one of his last roles, once more proved that he was an actor uniquely capable of playing either a dreamy goodnik or a sleazy no-goodnik with equal aplomb.

Beyond surrendering to the temptation of that age-old cinematic siren song, the one that whispers “oversexualize the hell out of characters that are allegedly like 15-years-old,” Finley’s restraint is on full display and is the key to what makes Thoroughbreds work. Not that this is in the same orbit as Get Out, but the film similarly extrapolates wealthy-white-girl privilege, weaponizing it into a deadly form for satire. Due to the key decision to not have Mark be an explicitly physically violent or sexually abusive douche-dragon, just a run-of-the-mill jerkwad, the emphasis stays squarely on the slightly-hyperbolized dangers of entitlement. Finley also wisely refused to tie a bow on the bitter humor, allowing the final scenes to be neither overly sentimental nor flashily profound.

Diversity isn’t just a matter of having more women and female heroes. It also means allowing not-men to be villains, antiheroes and, as in the case here, entertainingly sketchy, awful, entitled murderesses. Thoroughbreds probably isn’t quite as sophisticated as it may think itself to be, but it is proof that at least a modicum of self-awareness, impeccable casting and a savvy satirizing of significant social stereotypes can be an engaging endeavor.