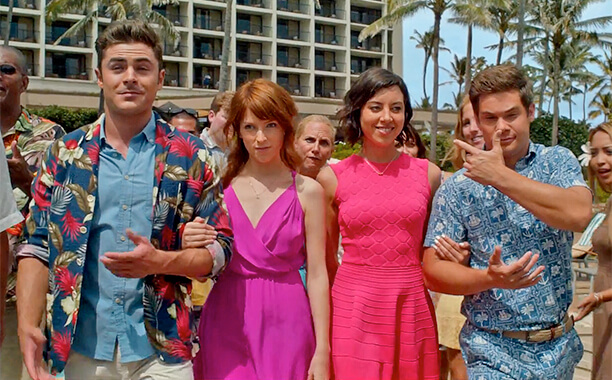 The titular characters in Mike and Dave Need Wedding Dates are intended to be lovable assholes. They are definitely assholes. That anyone would find them lovable is beyond the suspension of disbelief. Dave (Zac Efron) is a simpleton who perpetually looks like you just walked in on him flexing for himself in the mirror, and Mike (Adam Devine) is the kind of overly confident manbaby Jack Black rode into comedy oblivion for a decade. They are deeply unpleasant, sentient cans of Axe body spray upon whom unspeakable acts of violence should be perpetrated. Honestly, if Mike and Dave had less of Mike and Dave, it may have been more than passable.

Based on real-life brothers who took out a Craigslist ad to find dates for their sister’s wedding in Hawaii, Mike and Dave opens with a montage, just to let you know the kind of lazy bullshit ahead. Their sister, Jeanie (Sugar Lyn Beard), is getting married to boring oaf Eric (Sam Richardson), and the boys are tasked with not ruining the family event, as they have so many times before. Their father (Stephen Root) believes the key to this is having them choose “nice” dates to the wedding, as though the deviant mongoloids are capable of making a single good decision.

Surprise! They screw up and bring female ne’er-do-wells, Tatiana (Aubrey Plaza) and Alice (Anna Kendrick). Tatiana and Alice are supposed to be the gender-flipped versions of Mike and Dave. Except, they’re not. Tatiana is wickedly smart, albeit manipulative, and Alice actually has a reason to be emotionally stunted. Oh, and they’re both charming and funny, a vast departure from the violently unlikable male duo. The quartet obviously ruin everything, aided by fly-in-the-ointment, bisexual cousin Terry (Alice Wetterlund). And in case you forget the tone they’re aping here, the film explicitly name checks Wedding Crashers in the climax.

Let’s start with what works: every woman in the movie. Wetterlund is the kind of scene-stealing supporting character too rarely afforded to actresses. Plaza’s charisma wills her ill-intended character from despicable to embraceable-if-flawed. Kendrick leans on the “cute” but with a savvy cleverness. And Beard goes for absolute broke as the surprising target of almost all major physical gags, including a delightfully awkward nude massage with the well-oiled Keanu (Kumail Nanjiani).

What doesn’t work: Everything else. Attempts to humanize Mike and Dave are astoundingly lame. Dave can’t be a waste of carbon and oxygen, you guys: he draws cartoons for fun! Mike isn’t a vile sexual predator, everyone: he knows he’s just stupid! What’s unfortunate is that the blooper reel during the credits shows how whip-smart and talented Devine is. Let’s hope that, as his star grows, he seeks out opportunities to showcase his abilities beyond his third major role as “laughably cocky halfwit.”

Mike and Dave explicitly wants to be Wedding Crashers or at least join the club of The Hangover, Horrible Bosses and Old School. Maybe it could have, if it didn’t think of comedy as an “all boys club” and leaned more on the ladies doing the heavy lifting.