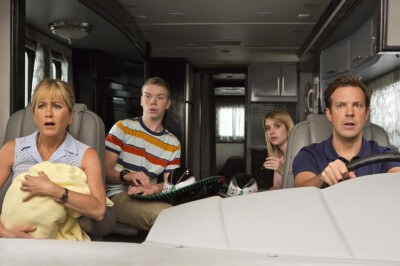 Marketing a comedy is a delicate balancing act: how much of the joke milk do you give away for free in previews and still have audiences enjoy the film cow when they see it? We’re the Millers is the latest in a long line of comedies to dangle red-band trailers like low-hanging raunch both online and in theaters. If you’ve seen them, you’ve seen a highlight reel of all We’re the Millers has to offer, save for swollen prosthetic genitalia worn by a teenage actor from Chronicles of Narnia.

Writers Bob Fisher, Steve Faber, Sean Anders and John Morris were apparently assigned one dirty joke apiece, and nobody earned a bonus. Director Rawson Marshall Thurber, whose name has more creativity than his film, more or less delivers The Hangover with sitcom trappings. Jason Sudeikis plays David Clark, as the increasingly ubiquitous R-rated comedy figure: the emotionally stunted man-child. Still selling weed like he was in college, an uncharacteristic act of altruism gets David in hot water; when his kind, virginal neighbor Kenny (Will Poulter) nearly gets knifed while protecting darling street urchin Casey (Emma Roberts), David gets robbed while trying to help.

As a result, David is in deep doo-doo (a technical term) with his drug lord, Brad (Ed Helms). With David at his mercy, Brad forces him to go to Mexico and retrieve a drug shipment. Knowing that alone he’s a walking red flag, David hatches a plan that involves convincing a stripper named Rose (Jennifer Aniston) to pretend to be his wife while Kenny and Casey play his kids. Along the way they meet an erotically challenged dorky couple (Nick Offerman and Kathryn Hahn), and Kenny gets a spider bite on his no-no parts. Because nothing says comedy like infected reproductive organs.

Say this much for We’re the Millers: it nailed the casting. Sudeikis has long flashed leading man potential, especially in this kind of sophomoric environment. Aniston has proven herself a gamer in the comedy world, and even Poulter and Roberts don’t ruin anything, which is atypical for former child actors. Even Offerman and Hahn delightfully improvise, riffing awkward sex talk like gross-out jazz. But it feels vulgarly rote.

And there’s something even more nagging here: Aniston’s Flashdance-inspired strip sequence. To say that it’s shoehorned into the plot is an insult to shoes, horns and…well, the plot is already kind of an insult to plots, but you get the idea. For some reason, people feel the need to praise Aniston’s ageless physique without asking why the hell a woman of her talents, reputation and career felt the need to humorlessly jiggle beneath a shower. If this is what is expected of a comedienne decades into her career, what in the name of Penthouse are they asking starlets to do?

We’re the Millers is more offensive for implications like that than for the on-screen content, which is mostly silly smut-lite. The bigger sin for audiences may be that by the time they screen the full film, they know all the jokes by heart.