It occurs to me that all nuclear physicists should be the most metaphysical and spiritual people on the planet. After all, their field of expertise obliges them to acknowledge a world that is not at all what it appears to be. You see, looking at the world with our physical eyes, the world seems to be made out of solid matter. Sure, there are liquids and gases but they are simply variable forms of matter. There is no convincing the eyes that solid matter is anything but just that — solid.

Yet a nuclear physicist, or anyone who has learned about atomic reality, knows better than to pretend the world of form is solid matter. A physicist knows that as we look to the inner dimensions, all that seemingly solid matter is made up of molecules, then atoms, then particles like quarks and leptons and bosons. The world is like one of those nested dolls. Sooner or later we find nothing but energy waves. So when a scientist of that ilk looks at any thing in this world, they should know it isn’t what it seems and that it is actually made of energy, not matter. The world is made of a series of names that describe nothing but energy.

Just the facts, ma’am. Still not convinced that the world is not really solid matter after all? Okay, here. Let’s talk facts. Most folks know that the basic building block of the world of form is the atom. (Actually, there are smaller, more basic building blocks but for a long time, we thought atoms were the smallest thing. Let’s roll with that.) The simplest example of an atom is the element hydrogen, the most abundant element, comprising 75 percent of the universe. 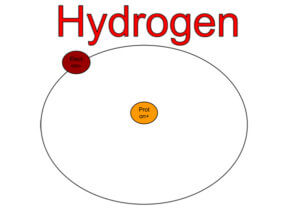 [If the nucleus were the size of a basketball, the electron would be two miles away!]

On the atomic level, hydrogen consists of one nucleus and one electron. The negatively charged electron orbits around the positively charged nucleus much like the moon spins around the Earth. That electron just keeps flying around that hydrogen nucleus at pretty much a constant distance. All this happens on a tiny, tiny scale, of course. But even down on that scale, that hydrogen electron is way far away from the nucleus. In fact, if we were to blow that hydrogen atom up in scale so that the nucleus, instead of being tiny, were the size of a basketball, to represent how far that electron is away, do you know how far away we would have to place that electron? If a hydrogen nucleus were the size of a basketball, by scale, the electron would have to be two miles distant. That’s a lot of space in between.

Overall, that kind of scale of distance holds true of any atom, of any element. All of this means that an atom is made up mostly of space. But what occupies that space between the nucleus of an atom and its electrons?

Use the Force. The space between an atom’s nucleus and the electrons is not empty. It’s filled with energy. That energy, described as Coulomb’s Force, is what keeps the electron from flying off on its own. And in a kind of energy balancing act, it keeps the electron from coming closer and crashing into the nucleus. Energy makes up most of what an atom is. And in reality, once we go even deeper into what makes up the nucleus of an atom, we find that the nucleus isn’t solid. The nucleus is also mostly energy, occupied by particles like gluons, mesons, quarks, leptons and so-ons. Those in turn are made up of mostly energy and those particles themselves are not really solid.

It’s the Law! Now the metaphysical part. The First Law of Thermodynamics is that energy can neither be created nor destroyed. It’s a basic rule of physics. Look it up. Understand it. Then remember that we have just used science to illustrate that you are not solid “matter” but rather, made of energy. So guess what? You, as an energy being, can neither be created nor destroyed. And science is getting darn close to making that postulate a theorem then a dictum. For now, you are simply believing that you are solid, that you are a “body.”

It is possible to experience life as the energy beings we really are. It requires a shift in the belief system that can actually be quite easy. As Mufasa in “The Lion King” uttered to Simba, “You have forgotten who you are.” All it takes is a little remembering and letting that Energy that flows through all things flow through our consciousness. More on the methodology later.

Heartland Healing is a metaphysically based polemic describing alternatives to conventional methods of healing the body, mind and planet. It is provided as information and entertainment, certainly not medical advice. Important to remember and pass on to others: for a weekly dose of Heartland Healing, visit HeartlandHealing.com.
2019.09.24