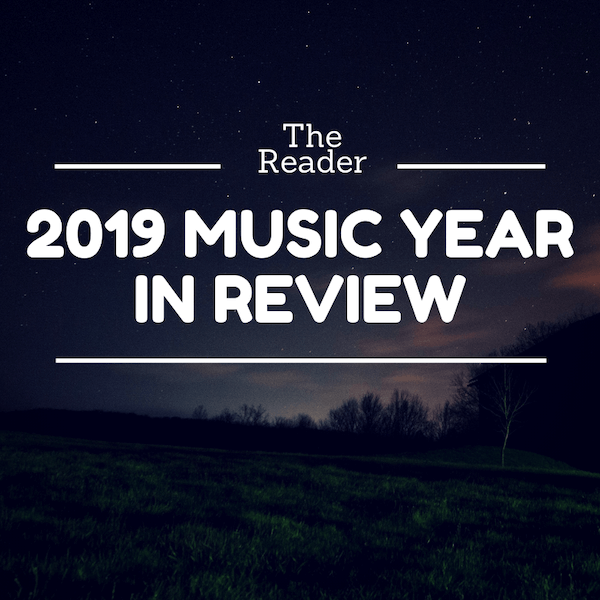 It’s not only the end of the year; it’s the end of a decade. But I’m not going to get into a review of the last 10 years because I only have about 1,000 words to write about 2019, and what a doozy of a year it was in music, especially local music.

Before I get to that, I would be remiss not to mention the quantum shift in how people consume music over the past 10 years. In 2009, we were just beginning to grasp how the move from CDs to MP3s was going to impact the music business. Those shiny new iPods were changing everything.

Ten years later and a different shift is near completion — from MP3s as the music format of choice to streaming. At least with MP3s, artists had something to sell, sort of. With streaming, paying artists has become an enormous shell game where no matter which shell they pick, nothing is found underneath, even for some established artists. As a result, for the first time in my memory, it is not uncommon to hear established artists say, “Why should I record new music? Fans don’t buy records anymore. All they want to hear when we’re on tour is the hits, anyway.”

As I’ve said in past columns, never has there been a worse time to be a start-up band. The new music business model: Record an album, upload it to Bandcamp, post a link to social media and get plenty of compliments, but no sales. I heard that story too many times last year from too many artists. Eventually, those artists may post their recordings to Spotify or YouTube, only to earn (if they’re lucky) a few bucks in streaming revenue. Touring for them has become a nonsensical money-losing endeavor if they don’t have merch to sell.

Even established indie artists are beginning to struggle to make money on tours. That, in a nutshell, is the music industry at the end of the teens decade. Where will it go in the next 10 years?

But back to Omaha.

There are four trends that deserve some reflection as we head into the roaring ‘20s:

I can’t remember any year as devastating as the last in terms of musicians moving away from Omaha. The list includes:

And those are just the ones I know. Lord knows how many others have high-tailed it this year. Once upon a time, around the turn of the century, Omaha was a magnet for talented indie musicians who flocked here to be a part of “the next Seattle.” Well, those days are long, long gone. Most who left last year are now Californians. A few headed to other music cities, such as Nashville and Portland. What it says about the direction of Omaha’s music scene is obvious. How we change the course, less so.

Building for the Future

Flying in the face of that mass migration is the number of music venues that dot the Omaha landscape: The Waiting Room, Reverb Lounge, Slowdown, The Jewell; arenas like CHI Health Center, Baxter and Ralston arenas; quality dive stages like O’Leaver’s, The Brothers, The Sydney, and just-opened boutique rooms like Bemis’ Low End. Have there ever been more stages for live music?

Apparently not, and more are on the way. Shovels turned dirt for the new multimillion-dollar La Vista indoor club and amphitheater being brought to you by the fine folks at One Percent Productions, announced in 2018 but only just now getting all the paperwork in order to begin construction. We’re talking a venue with a capacity of 2,000 inside and 4,500 outside, all at a cost of millions.

And speaking of millions, how about the proposed $109 million music hall that Omaha Performing Arts wants to build downtown, designed to accommodate up to 3,000 standing patrons (because there are no fixed seats)?

Add to that at least two more smaller stages getting ready to raise curtains, with more on the way. All this money to build venues while the local talent needed to perform on them either moves away or quits because they can’t make a living playing music. Maybe it’s time someone figures out a way to funnel at least a portion of the millions spent on venues to local artists making the music.

It wasn’t all bleakness in 2019. The Maha Music Festival enjoyed its biggest year ever, thanks in part to booking superstar act Lizzo just before she blew up nationally. The two-day festival sold out its second day (Lizzo Day) rather quickly. Now the question for 2020 is whether Maha will continue along its original mission of bringing the best indie music to Omaha, or if last year’s Saturday crowd has organizers thinking of bigger, more pop-oriented fare. My advice: Bigger is almost never better.

While women continue to dominate the national indie (and pop) music charts and best-of lists (off the top of my head, Lana Del Rey, FKA Twigs, Big Thief, Angel Olsen, Solange, Billie Eilish and Sharon Van Etten), Omaha women have never been more under-represented in our own music scene. This was no more apparent than when The Reader compiled its annual Top 20 bands lists — lists dominated by male-fronted bands. Of my own contribution to that list, only a few acts even had a female member — See Through Dresses, Domestica, Wagon Blasters, Thick Paint and Cursive.

Never has an organization like Omaha Girls Rock been more needed. The nonprofit’s mission is to empower youth to find their unique voice through music education, performance and creativity. It does this through a strong team of local musicians who work one-on-one with girls and young women, teaching them all kinds of things, but especially how to rock. And Lord knows, Omaha needs more of that.

In fact, my top-10 list of favorite albums has the least Omaha representation in recent memory. Here they are in no particular order:

I attended fewer rock shows last year than any year previous. I blame my day job, but I can’t ignore the fact that fewer indie shows are being booked at our main clubs — The Waiting Room, Reverb, Slowdown and O’Leaver’s. It’s a sign of the times and that we need more concert promoters in Omaha, because, like I said, we’ve got more than enough venues.

Still, it was a great year in live music. Here are the best shows I attended:

Better Oblivion Community Center at Slowdown, March 21 — Conor Oberst and Phoebe Bridgers’ side project was a main event throughout most of 2019.

Hand Habits w/ Tomberlin at Slowdown Jr., April 1 — A mini-Saddle Creek showcase, Hand Habits’ Meg Duffy showed why she’s one of the most sought-after guitarists in the indie world.

The Faint at The Waiting Room, May 24 — It came down to that moment everyone waits for — “Glass Danse” — when the whole crowd erupts, and that night was no exception. The floor became a trampoline, just like in the good ol’ days.

Disq at Slowdown Jr., June 2 — They sounded like a modern-day mix of all your ‘90s favorites — from Teenage Fanclub to Weezer to Pavement to No Knife — played by youngsters too young to have heard of any of them.

Minne Lussa / Wagon Blasters at Farnam House backlot, July 6 — From rousing to haunting in a makeshift space behind a brew pub.

The Beths at Slowdown Jr., July 15 — They played like a family unit, maybe because they’re all New Zealanders stranded in this very strange land.

Little Brazil at Benson Days, July 27 — The new tunes pointed toward the same short, sweet rock direction heard on their last record, as if the band is trying to put together a string of singles.

No Thanks at O’Leaver’s, Aug. 5 — Shirtless in tight black pants and black lipstick, Castro Turf’s spaz-rock preening conjured comparisons to The Cramps’ Lux Interior, nervously/feverishly pacing back and forth in front of the band for the first half of the set and spending the second half immersed in the humanity that crowded the stage.

Maha Music Festival, Stinson Park, Aug. 16-17 — Everyone was talking about Lizzo, but for me it was all about Courtney Barnett on Friday night and that killer Oh Sees set Saturday afternoon.

Digital Leather at The Sydney, Sept. 6 — Shawn Foree shifted to bass fronting on a set of recent and new songs (“Compass”) that gave me hope for the next album.

Cursive at O’Leaver’s, Sept. 23 — Always dark, Cursive’s new music was pointedly political, representing a shift from anxiety to fear — a reflection of our times when a monster is running amok before our very eyes and there’s nothing anyone can (or will) do about it.

Las Cruxes at The Brothers Lounge, Sept. 27 — A cross between The Pixies and every three-chord punk band you’ve ever heard, propelled full-throttle by a double-barrel drum attack and sung in Spanish for good measure.

Deerhoof at Low End, Oct. 25 — The venue — a new Omaha stage dedicated to experimental music — was as interesting (or more so) than the headliner.

Solid Goldberg at O’Leaver’s, Nov. 26 — Nothing says Thanksgiving like O’Leaver’s and an Omaha legend with a new punk/blues attack. I’ll take another drumstick, please.

Relive the year gone by with the  Lazy-i Best of 2019 Playlist! The collection includes my favorite indie tunes I’ve come across throughout last year as part of my tireless work as a music critic for The Reader and Lazy-i.com. Among those represented: DIIV, Hand Habits, Uh Oh, Sharon Van Etten, Orville Peck, Simon Joyner, Prettiest Eyes, Purple Mountains and lots more.

Listen on Spotify. Simply click this link or search “Lazy-i” in Spotify and you’ll find the 2019 playlist along with a few from past years, too.