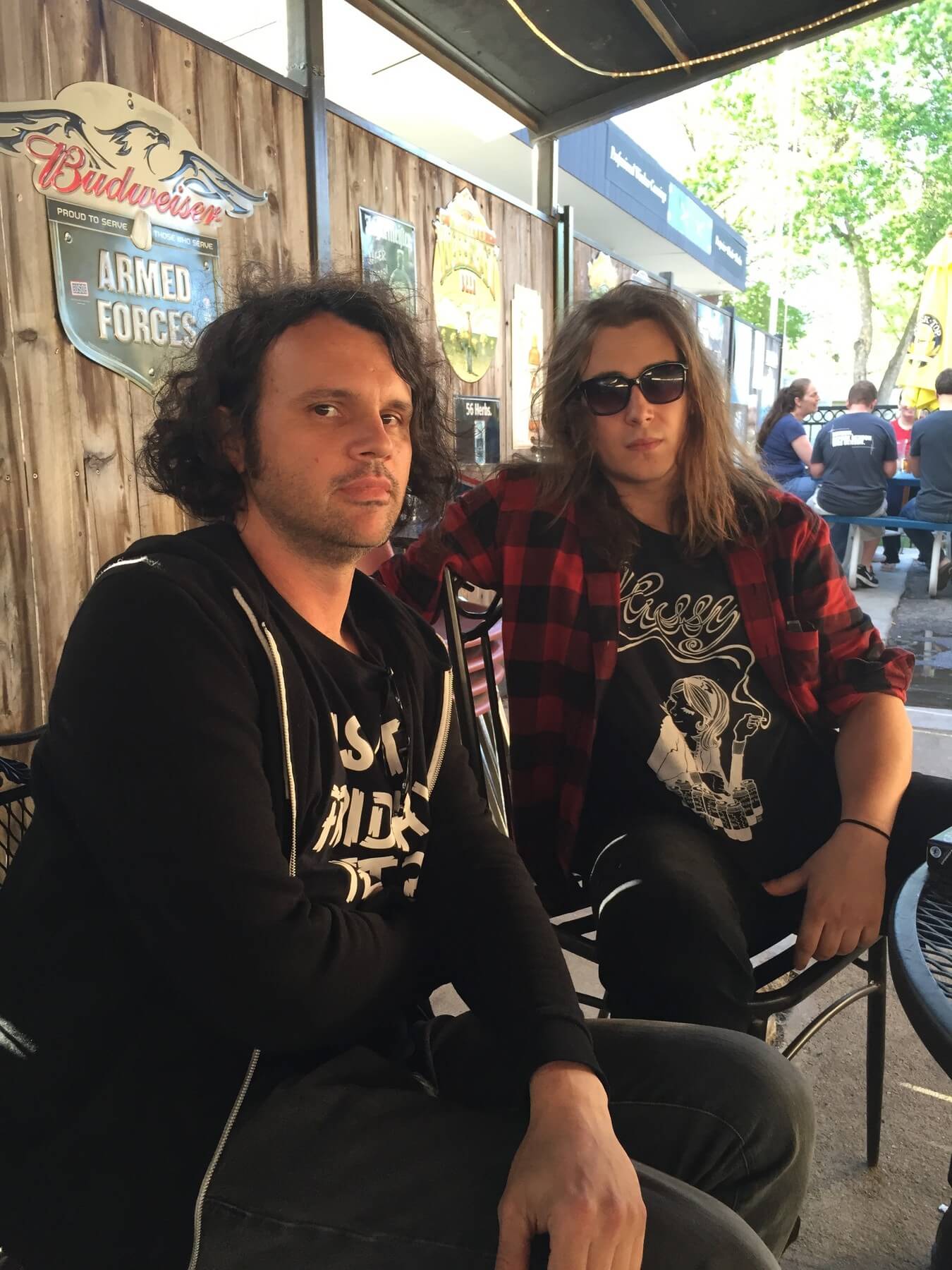 Since the project’s self-titled debut, released in 2003 on Arizona punk label King of Monsters, Foree has played every part heard on every Digital Leather record despite surrounding himself with various musicians on stage.

But that began to change seven years ago when Foree moved to Omaha from Tucson, Arizona, a town he calls “a fucking shithole” where “there is no music scene; there is nothing.” He says he came to Omaha to escape a “horrible girlfriend,” the one who presumably inspired the writing of misunderstood gay-love song “Studs in Love.”

After arriving in River City, Foree quickly became a fixture at local watering hole/music venue O’Leaver’s, where he met Johnny Vredenburg, then a member of gritty garage punk band The Shanks.

“I was a huge fan of the 2005 (Digital Leather) release Monologue,” Vredenburg said, recounting his history with the band. “I couldn’t believe my band was going to play with f**king Digital Leather. Shawn and I hit it off right away because The Shanks was this nasty, gritty f***ing band out of their minds about sex, drugs and rock ‘n’ roll.”

Vredenberg said all this while sitting in the covered patio at The Nifty, the kind of place where the bartender gives strangers “what-the-f***-do-you-want?” looks when they walk up to the bar to place an order. He was joined by synth player Ben VanHoolandt and Foree, all smoking cigarettes and sipping on Busch Lite while Warren Zevon sang about werewolves from speakers hidden overhead.

Foree is considered a quiet man by those who don’t know him. Some think he’s stand-offish, but he’s actually an introvert who doesn’t like to mince words with strangers.

Vredenburg is the opposite side of the coin — kinetic bordering on spastic, bouncing from one subject to the next while Foree quietly answered questions in few words, preferring to let the rest of the band continue the story.

Shortly after playing a few shows with The Shanks, Foree asked Vredenburg to join Digital Leather… on drums. “Not a good idea,” Vredenburg said, instead suggesting he play bass and that Jeff Lambelet handle drums. It was a wise decision. Just last month Foree told College Music Journal the rhythm section of Vredenburg and Lambelet “drives Digital Leather harder than any current band I can think of.” And he was right.

For the next few years the band was a guitar-bass-drums trio with an occasional keyboard player, despite Digital Leather’s rep as a synth band. Ironically, Digital Leather’s 2009 Fat Possum label debut, Warm Brother, introduced an even bigger audience to DL’s synth rock sound. But despite that record’s overflow of great songs (music website Pitchfork gave the album an impressive 7.3 on a 10-scale), Digital Leather rarely played any of it live.

“It was all made up in the studio,” Foree said of the album.

“We tried as hard as we could to translate it live on those initial tours,” Vredenburg said. But it didn’t work. The band continued as a guitar-based trio despite Foree recording more synth-heavy albums like 2011’s Infinite Sun (Volar) and 2012’s Modern Problems (FDH). Those records caught the attention of The Faint’s Todd Fink, who made it known that he wanted to play keyboards in Digital Leather.

As with past recordings, All Faded relies on old-school synth sounds that recall acts like Gary Numan, Devo and, maybe most surprisingly, The Cars.

“I’ll take that all day,” Foree said of the Cars reference. “There’s nothing (on the album) near the kind of musical acumen of the Cars, but the Cars are definitely there.”

Ask Foree which bands belong on a Digital Leather Pandora channel and he’ll mention underground acts like Grave Babies, The Spits, Black Bug and his pals in The Hussy. But don’t mention Joy Division.

“There’s a Joy Division connection with us that I f***ing hate,” he said, adding that people often make the connection because both bands feature synths. “They’re not one of our influences.”

Instead, Foree points to Kraftwerk, and of course, Devo. “I love every Devo album, even the new record,” he said.

Another influence is Jay Reatard, the Memphis rocker who made a name for himself as a member of The Reatards and Lost Sounds before forging a solo career that would end with his drug-related death in 2010. Reatard not only was Foree’s friend, he helped manage his career. It was Reatard who connected Foree to FDH and Fat Possum Records.

Foree still harbors anger at Matador Records, the massive indie label that signed Reatard prior to his death. “I thought they took this incredible, volatile guy that they thought they could sell and gave him a bunch of money,” Foree said. But when the music didn’t sell as well as they expected. Reatard blamed himself. “It sent him into a tornado of drug abuse, and he was never a heavy drug user.”

Perhaps Reatard’s most lasting influence on Foree was his ceaseless work ethic.

“When he was alive, he motivated me,” Foree said. “We would put out records against each other. ‘Oh, I can do this.’ ‘No, I can do this.’ Who could be the biggest rock star or at least who could write the better song to impress the other guys? Then Jay did Blood Visions (In the Red, 2006), which took off and he had to go his own way.”

Foree is one of the most prolific songwriters and musicians in Omaha, releasing an album a year peppered with singles, split EPs and outside projects. Last year’s split LP with The Hussy, released on Southpaw Records, was a surprise even to his own band members who didn’t know until after the release date was announced that Foree had been working on the record in his bedroom.

All Faded is a departure from Foree’s usual fast-paced recording process. The album was recorded at The Faint’s midtown studio from the fall of 2013 through 2014 — a monolithically long time for a Digital Leather record. Foree pointed to Fink’s meticulousness as one of the reasons it took so long.

“We put a lot of time into it,” Foree said. “This is the way I prefer to do Digital Leather records from now on. It just takes a lot of f***ing work.”

“It was really neat to watch those two work together,” VanHoolandt said, “because Todd’s a huge perfectionist and Shawn isn’t, which is probably why he gets so much stuff done.”

“I don’t care about perfection at all,” Foree said. “If I didn’t put my foot down on this record, we would still be working on it because Todd likes to get in there and sit behind a computer and do things I would never think of doing. At some point, you just have to say, ‘That’s enough.’ Like Leonardo said, ‘A work of art is done when you give up on it.’ You’ve got to say ‘F**k it’ and walk away.”

The final product, Foree said, is “Loud as shit. It’s definitely not garage rock. It’s not even rock. We can write a pop song and play it in a way no one else can. There will be no record that comes out that sounds like this one.”

Now all he has to do is get people to listen to it. His record label has hired a publicist, though Foree is skeptical All Faded will get that coveted review in Pitchfork — something he badly wants.

“I don’t know why I’m obsessed with Pitchfork,” he said. “If I could get a hold of them I’d go to their houses and strangle them and make them write it. It’s very frustrating.”

The one thing he can control is touring. Foree doesn’t like to use that word “tour” to describe two-week jaunts like the one scheduled for early June that takes Digital Leather into the South, up the East Coast to Virginia and New York City before returning to the Midwest (including a June 27 show at O’Leaver’s with The Hussy that’s being billed as a “Free Hot Dog BBQ”).

After those dates, Digital Leather is scheduled to play a few shows with local punk band Desaparecidos in July. Foree said Todd Fink won’t be along for the road shows because he’s training a new keyboard player for The Faint. Taking his place is Greg Elsasser (Capgun Coup), leaving one to wonder if there will be any other personnel changes, and if the Tucson transplant will stay put.

“Me and Johnny have stuck together for a long time,” Foree said, “and Ben is never going away. Digital Leather is a band from Omaha, more than it’s ever been a band from Arizona. I’m not going anywhere.”

“I cannot imagine playing this music with any other group of dudes,” Vredenburg added. “This band is a f**king home.”

One thought on “Loud as Shit”