Home » News » Over The Edge » Tuning into Hi-Fi House

On the surface, it seems difficult to explain the concept behind Hi-Fi House, a private club that charges members anywhere from $75 to $1,000 a year for the privilege of playing its record collection on its stereo systems.

You might naturally say to yourself, “I could buy a whole bunch of records for $1,000 that I could play whenever I want to in the privacy of my own home,” but you’d be missing the point.

The club, located at 3724 Farnam St. in the Blackstone District, has been operating privately for more than a year. I first stepped foot in Hi-Fi House last year during a Record Store Day event where the public was allowed a sneak peek.  The facility is first class all the way — a huge open, carpeted space with comfortable furniture arranged in circles throughout, centered around stereo equipment set-ups, including one I was told cost $80,000.

Behind the big room is a couple smaller rooms. Inside the first is Hi-Fi House’s massive album collection — more than 10,000 vinyl records. A glance at the titles indicates the music touches all genres, with issue dates ranging from the 1940s to present. Some of albums look unplayed and are still sealed. On display are a number of interesting music-related items, like a Patti Smith edition of a Pono Music Player — something I’d never seen in real life.

On the afternoon of that sneak peek, local bands performed in the space, including an early incarnation of the progressive jazz combo Chemicals. A small crowd watched the performance while enjoying beer and wine served at a bar near the club’s front door.

For reasons I never understood, Hi-Fi House was hush-hush back then. At the time, owner/operator Kate Dussault wouldn’t give me an interview on the record, though the club had been operating for months, including offering special music programming for children.

Well, the cloak of secrecy finally was lifted from Hi-Fi House last month when the organization launched a website — www.hifi.house — and began actively soliciting memberships. Dussault, now on the record, explained why the club operated in secrecy for so long.

“One reason was that we really wanted to experiment with all the programming,” she said, seated at one of the club’s large tables alongside Hi-Fi House General Manager (a title made up on the spot) Jon Ochsner while that $80,000 stereo system quietly played some funky jazz sides.

“The other reason was to really let the music community have the space pretty much to themselves for a period of time. We were able to have a lot of conversations with local artists and people who work in the industry to find out how we could best live in this community and serve it.”

In a nutshell, Dussault said, Hi-Fi House was built “so musicians could have their own private club. We’re offering a place where they can communicate with each other.”

She said musicians often don’t have time to chat when they’re at venues performing, “but when they come over here, they can really sit down, share music and listen to music together, and a lot of them really love that experience.” 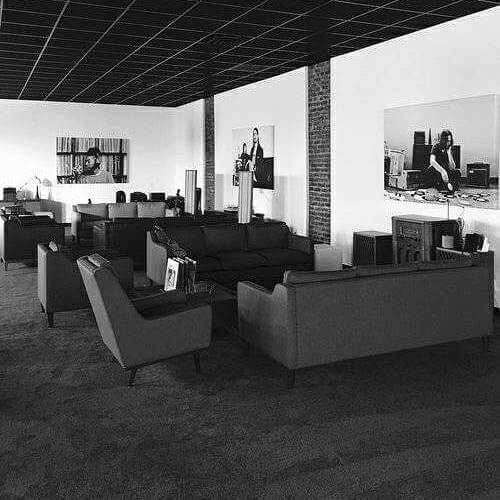 Think of it like The Omaha Press Club, but instead of focusing on journalism and public relations, Hi-Fi House focuses on music. Fees start at $75 a year for a “lab membership” that allows access to Hi-Fi House during daytime hours. In the evenings, Hi-Fi House turns into a private club whose membership fees (which cover one person and a significant other) range from $300 a year for musicians to $600 a year for members of “the industry” — a broad category that includes any career that touches music, from journalists to studio employees to club owners to people involved with music-related nonprofits.

Finally, there’s the general public membership at a cost of $1,000 per year. Dussault doesn’t sound like she expects to sell many of those, but with the venue’s capacity rated at only 125, she doesn’t want to oversell memberships, anyway. She said she’s already sold a few hundred memberships, with all the money received channeled back into covering facility costs, which include constantly buying new records for the club’s ever-growing collection.

In addition to access to that collection, members are invited to attend special night-time programming that includes exclusive album listening parties, chats with artists and industry professionals, and intimate performances, such as a private concert last year by The Replacements’ Tommy Stinson.

With its heavy music education focus, you’d assume Hi-Fi House would consider becoming a 501(c)(3) nonprofit entity, but Dussault wants to steer clear from that for now. “The truth is most nonprofits have to scrap and re-raise their operating money every year,” she said. “It’s difficult, and they are at the whims of, in some cases, the same very few people who are supporting everything else. It doesn’t give you a chance to break out and invite new people to the party.”

So sure is she of the Hi-Fi House concept, she’s already planning to expand to other cities. After spending the next three months working alongside Ochsner, Dussault will move to New York City where she’ll spend three months with lawyers and other associates to review expansion plans.

“We’ll be solidifying New York, and then I’ll be traveling to Boston and other nearby cities,” she said, adding that there’s already “movement” for clubs in Denver, Des Moines and Chicago. “We’re talking to people in San Francisco, Oakland, Sacramento, Portland and Seattle, as well as five different Los Angeles locations.”

Surely Dussault must be a wealthy woman to make all of this happen. She just laughs at the suggestion.

“This is a labor of love,” she said. “I work two full-time jobs while I do this. I have a medical house-call company in New York that I spend a good six hours on a day on and I do some work for a music supervision firm in New York. If I weren’t doing those things, we wouldn’t be alive.

“Everything doesn’t have to be a nonprofit,” she added. “Some people have to take their own money and get out there and gamble it on making changes. I’m willing to live or die based on what I can deliver these people, and whether they’re happy with the experience.”

One thought on “Tuning into Hi-Fi House”