Home » Top Story » Amber Ruffin Is Not Holding Back

Amber Ruffin emailed me and she begged me to interview her, so I did.

Well, not exactly, but that’s the line that the Omaha-born comedian told me to say in my editorial meeting. “I can’t wait to hear that story,” she said laughing. I, like I am sure a lot of us do, appreciate a good sense of humor, and it was an absolute pleasure experiencing hers when she called from her home in New York one fall afternoon.

Most know Amber from her work as a writer on “Late Night With Seth Meyers,” which she has been doing since 2014. The hilarious “Amber Says What?” segments were a great take on the nation’s headlines and wild news items, things that make you say, ‘What?’ She has also written for the hilarious “A Black Lady Sketch Show” and is known for her appearances on Comedy Central’s “Drunk History.”

It was obvious to fans, viewers and even Seth Meyers that Amber needed her own show, and on September 25, 2020, The Amber Ruffin Show premiered on the newly formed Peacock Network. Us Omaha-dwelling comedy lovers felt nothing but pride when we turned on the half-hour variety show for the first time. We knew America was in for a laugh.

But America was going to get more than hilarious, intelligent jokes and sketches from the multi-talented artist. America was going to get a Black woman from the Midwest that was going to stand at 30 Rock in the heart of New York City, turn on her mic and loudly call out systemic racism. Her monologues, sketches, and performances would be chock-full of the unapologetic dragging of racist systems and the calling out of individuals displaying racist behavior.

We got a taste of this on Seth Meyers Show’s segments. One that stands out in particular is the time when the show needed to make a statement about the murder of George Floyd. Amber delivered a monologue called, “Amber Ruffin’s Experience With the Police: Driving as a Teen.” After telling the story of how terrified she was facing an irate cop one morning, she said, “I wanted to end this with something hopeful to provide some comfort, but maybe it’s time to get uncomfortable.”

The outspoken nature of her views has continued over to her show. My favorite is Episode 4 that aired on October 23rd 2020 when she scathingly called out Republican Senator David Perdue for mispronouncing Vice Presidential candidate Kamala Harris’ name. “Fix your mouth and say it right.” she says with ferocity. She made sure we all knew that now that she was in charge, she would not hold back. 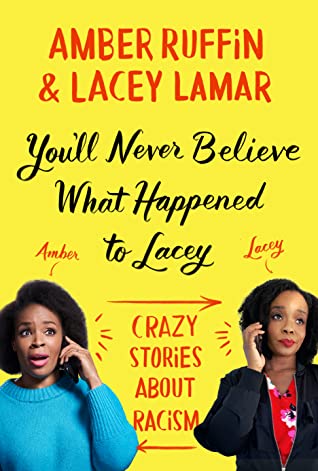 The calling out continues in the form of a book. Amber, with her sister Lacey Lamar, has a book coming out in 2021 called, “You’ll Never Believe What Happened to Lacey: Crazy Stories about Racism.” The book is about some of the crazy racist things that happened to Amber’s sister Lacey who still lives in town.

“Because when you’re a Black lady at work, you usually keep a list of, you know, the crazy racist things people have said to you, lest they go to their boss and go, ‘Oh she’s crazy,'” Amber related. “Normal Black stuff,” she said with a laugh. “She had so many stories that even if we took just the unbelievable ones, there was more than enough for a book. So we did, and it’s hilarious. ”

Living in the predominantly red state of Nebraska, many people of color can relate to situations Amber describes on her show, and the notes that Lacey kept over the years. I wondered what she thought Omaha needs to do to improve.

“I think Omaha should do the thing all big companies should do. And that’s to hire companies that help… There are things like Inclusive Communities and companies like that who will come into your company and be like, ‘Oh you can’t be acting like this…’ As long as there are those types of companies to report your H.R. violations to, that’s what matters.”

What’s stood out to me in the midst of her classic wit and humorous performances was biting criticism about the world we live in now. The Amber Ruffin Show is not focused on escape, instead it’s a timely contemplation on things going on in our society. I asked Amber what she thinks would happen if Trump wins the election.

“I think that if Trump wins that anything could happen. Like, I still can’t believe what happened at the border happened and just everyone was like, ‘Well okay.’ Isn’t that crazy? Just literal crimes against humanity. And it’s fine and he needs to be re-elected. It’s insane to me. So like, I think it will just be like the border except worse. And it will be a lot of mass incarcerations, I do think that… you know, he is always saying, ‘We will open up the libel laws.’ I think what he means by that (is) when you speak ill of him you’ll go to jail. We’ll be a fascist state, I guess is the short way to put that.”

A running conversation that is happening right now in the Black community is what to do about white supremacist groups who are threatening a second civil war and committing acts of domestic terrorism now. I wanted her take on what she thought about the threat.

“They [white supremacist groups] are trying to create this feeling of, like Black people are actively hating white people. But when we say racism, they hear ‘white people,’ so they are fighting a fight where no one is fighting with them.” She laughs. “You can be anti-racism and not be anti-white people.”

As a Black man, I still get a little surprised when I hear someone on mainstream television, a major network no less, boldly and plainly say these things, especially when she doesn’t put it in the form of a joke, a technique she sometimes uses for effect. I wondered if Amber got any backlash from the network about her positions.

“No, I think the network knows what they are in for.” She laughs. “I think they know what I am liable to say and they know it’s only going to get worse when I’m the one in charge. So I do think I’m not giving them anything that they didn’t one thousand percent expect. I’m just very lucky that they will let me go to town on a subject and be like, ‘Systemic racism exists even here! These people are crazy.’ It’s crazy that they let me say that. But they do.”

Amber’s voice is an important one, not just to Omaha but to the nation as a whole as pertaining to our current racial climate. The authority she projects, the clear nature of her language and thoughts, and the fact that she can find the good and even the humorous in painful situations, puts her on the same stage as Dave Chappelle, John Stewart and other giants that tell us what we need to hear, it a way we can hear it.

When I asked Amber if she had any parting words, without hesitation, she said, “I love Omaha and I miss it.”

I was surprised at her tone, going from one of matter-of-fact “Omaha needs to fix itself” to the lightness of her missing Zesto’s chili dogs. She finished with a story about her loving Emory’s Cafe, a North Omaha restaurant on 24th Street.

“I love eating there. And they always bring out the tiniest little thing of greens, and I go, ‘What is this? What am I, a baby? Bring me some greens!’ The lady is prepared for my antics every time I go in there. She looks me in the face, and she can’t remember me, you know because she deals with people all day, and then I look at her and I go, ‘Hmm I think I’ll take the BUCKET of greens.’ And then she laughs and remembers.”

The only other food she is missing is whatever her mom is cooking. Amber is a proud Omaha woman, with a late-night talk show, unapologetically telling America to stop being racist, making us feel levity and pride with every episode. Like she says in Episode 4, “I am Amber Ruffin, and this is the Amber Ruffin Show. Don’t you forget it.”

Amber still writes for the Late Night with Seth Meyers weeknights on NBC, and hosts the Amber Ruffin Show on the Peacock network once a week. “You’ll Never Believe What Happened to Lacey: Crazy Stories about Racism,” is due January 12, 2020.