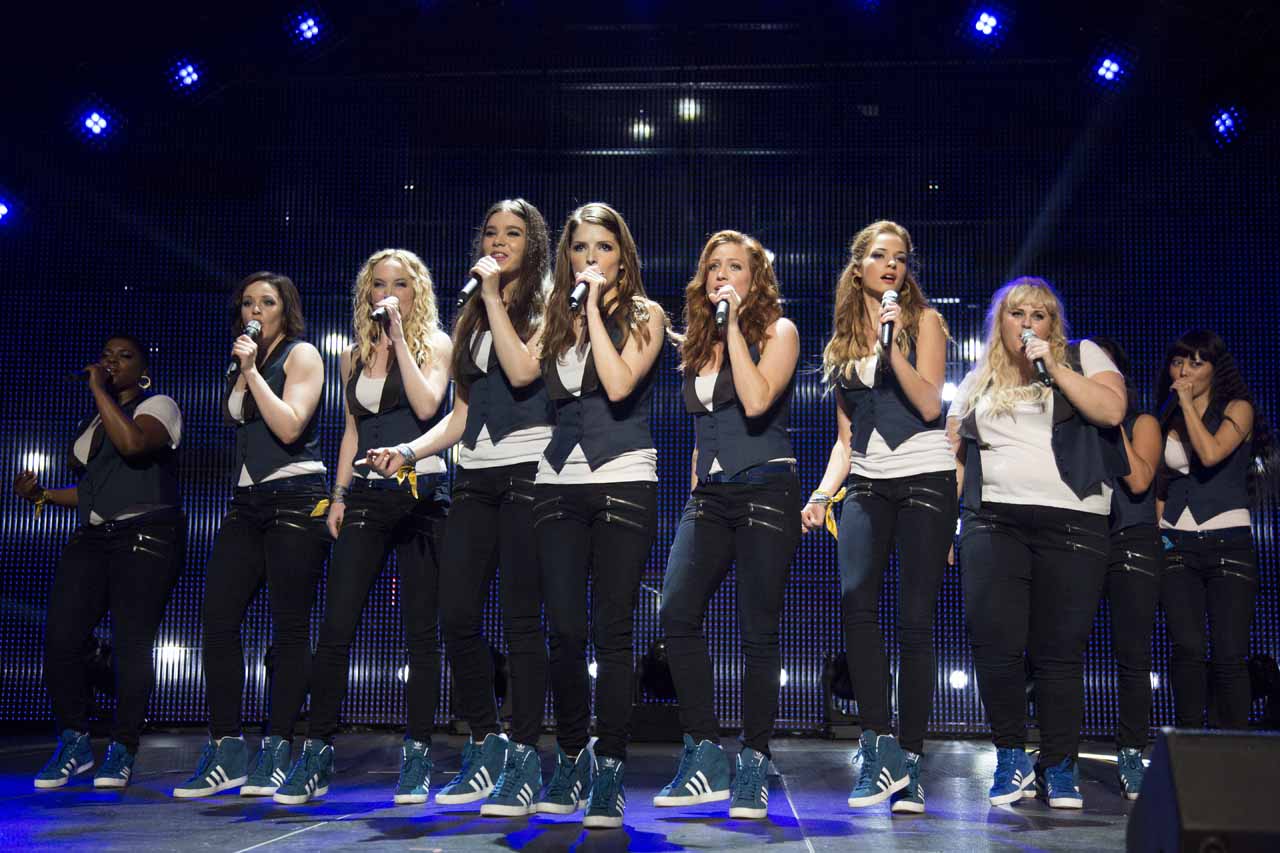 Pitch Perfect was a comedy ninja, stealthily stepping from shadows to chuck a throwing star of hilarity into the funny bone of unsuspecting viewers. But Pitch Perfect 2 is an encore performed before a ravenously loyal crowd demanding to hear certain hits. It’s clear that everyone, including first-time director Elizabeth Banks, felt the pressure to obey the raised lighters in the audience and repeat certain notes, lest those lighters become torches and pitchforks. Awkwardly redundant at times, the sequel ultimately does sing well enough for its supper…just maybe not dessert.

Pitch Perfect 2 opens with the Barden Bellas performing for the President, fresh off having won their third consecutive national acapella singing title. In the first of many refrains from the original, the Bellas have a horribly embarrassing incident in public. This time, instead of projectile vomiting during competition, Fat Amy (Rebel Wilson) shows President Obama her full Benghazi. The group gets suspended and can only be reinstated if they win the acapella world championship, which no American team ever has won before because, as the film hilariously reiterates, everyone in the world hates America. Fair point.

Basically, it’s your typical “save the summer camp by winning the contest” plot. But, hey, it’s stuffed with all your favorites! A rap battle-style “riff off,” an oddly melancholy remix of breakout hit “Cups” and lots of Fat Amy overconfidence jokes. Pitch Perfect 2 has a killer cast of likeable characters but, sadly, forgets to give them stuff to actually do. Beca (Anna Kendrick) has an internship that’s not only without conflict or stress, it’s arguably the greatest internship of all time. Fat Amy and Bumper (Adam DeVine) oddly explore their relationship, and newcomer Emily (Hailee Steinfeld) struggles to find her place on the team.  Every other character is just kinda there, likely repeating their bits from the first film.

And yet, there are signs of the lighting that was bottled once before. Newcomer Flo (Chrissie Fit) is easily the best addition. Her character’s horrifying asides about her life before getting to America delightfully skewers the melodrama espoused by characters who are convinced acapella competitions are the most important things in human history. Kendrick’s clearly improvised sarcastic moments crackle, the music is always a blast and somehow Fat Amy manages to avoid the “Jack Black uncanny valley” and remain hilarious a second time.

What’s missing is the spontaneity and recklessness that allowed the first film to feature a character making snow angels in a pool of barf. Pitch Perfect felt gleefully wild. Pitch Perfect 2 feels calculated if ultimately satisfying. To put it in more musical terms: If the original was an album you still play on repeat without skipping a song, this sequel is worth putting in sporadic rotation for a few killer tracks.