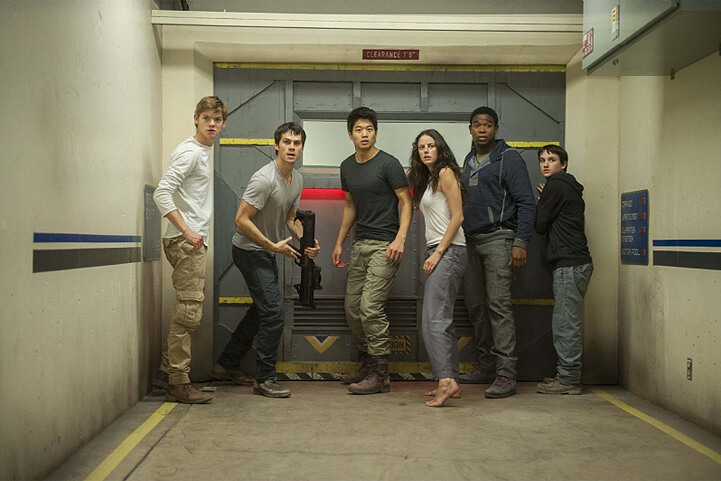 There are three perfect scenes in Maze Runner: The Scorch Trials. Not “good” scenes. Not “great” scenes. Three perfect scenes. Now, as a whole, The Scorch Trials is not a perfect movie. Nor is it a great one. But it is very good, and most of that has to do with director Wes Ball who wrangled derivative, cliched content into a thrilling, emotionally captivating adventure-gasm.

If you haven’t seen or read the first Maze Runner…I have no idea why you’d be reading this review. But if you haven’t and plan to see it or read it, eject your eyes from these words now, as you can’t talk about The Scorch Trials without spoiling the crap out of the previous installment. Picking up minutes later, we see the survivors of “The Glades” maze as they arrive via helicopter at some kind of militaristic facility. A soldier escorting them suddenly yells “CRANKS!” and everybody with a gun gives their trigger finger some exercise. Once safely inside, our hero, Thomas (Dylan O’Brien), starts piecing together they may not be safe at all.

The facility is populated with survivors from several different mazes, including Aris (Jacob Lofland), who quickly helps Thomas confirm they are, indeed, quite screwed. Once more, Thomas leads his friends, including Minho (Ki Hong Lee), Newt (Thomas Brodie-Sangster) and Teresa (Kaya Scodelario) on a wild escape, this time through “the scorch.” If it sounds like the scorch is no fun, it isn’t. The world is now a hot sandbox of death populated by “Cranks,” former humans turned zombie by “the flare virus.” So Thomas and pals must navigate the nasty postapocalypse and find shelter, if such a thing exists anymore.

Honestly, the concept is little more than mashup fanfiction. Young kids immune to a virus fighting zombies in a dystopian future is as rote as young adult content can be these days. And I know you were worried, but yes, there is a wholly unnecessary love triangle between the only two women given any substantive screen time and our blank-slate hero. Honestly, the cast does a hell of a job with the generic generalness of their largely amnesiac characters. Charisma and body language go a long way, even in “the scorch.”

But this movie is about its director. Give Wes Ball a Star Wars movie, a Marvel movie or, hell, let him do whatever he wants. Those three perfect scenes? One: The downtrodden posse silhouetted atop a desert dune who all pause when they hear a mournful, significant sound. Two: The introductory zombie chase unfolding in a way that feels new in a world with seemingly millions of such scenes. Three: The “out of the frying pan” sequence that starts with Thomas and Brenda (Rosa Salazar) surviving a collapsing building and ends with Cronenberg horror in an underground tunnel.

A good director lives up to the level of his content. A great director elevates it. A very special director takes average-at-best material and turns it into a rousing thrill ride that never loses its humanity. The Scorch Trials isn’t perfect, but man, some parts really are.