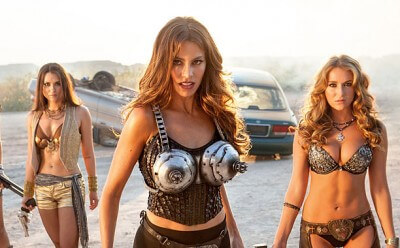 I have a friend who tells this one joke where it takes an eternity to get to the punch line. And that’s the real joke: that you donated so much of your time for such a small amount of pleasure. The psychology behind my friend’s “humor” has apparently become writer/director Robert Rodriguez’s mission statement. Machete was fairly amusing when it played in Grindhouse as a trailer for a film that didn’t actually exist. It was significantly less amusing when it became an actual, full-length film. Now here we are, six years and more than 200 minutes of time invested in a joke that was passable when it took less than a minute. Before we go further, you should know I gave Ticked-Off Trannies with Knives a positive review, so I “get” grind-schlock. This isn’t that, this is someone doing a bad impression of that.

Danny Trejo is back in the role that made him ever-so-slightly more famous. This time, he gets recruited by the president (Charlie Sheen…although, the credits actually introduce him as “Carlos Estevez”) to stop a crazy plot that unites drug cartels, global nuclear war, space ships and a secret agent with at least three separate personalities. The decision to pretzel-twist the narrative was made solely to work as many WTF cameos in as humanly possible. These cameos include Sofia Vergara as a machine-gun-breasted madam; Lady Gaga, Walter Goggins, Cuba Gooding Jr. and Antonio Banderas all playing the same character (you read that right) and Vanessa Hudgens, Michelle Rodriguez, Amber Heard and Alexa Vega in various states of undress.

And then there are the villains, Voz (Mel Gibson) and Mendez (Demian Bichir). Gibson is paying his penance to America for his unspeakable douchebaggery by slumming in this low-budget raunch-fest, in which we cathartically get to root for him to be mutilated. But it’s actually Bichir who delivers the only interesting performance in this whole embarrassing kerfuffle. His buck-toothed megalomaniac with multiple personalities is played with the right kitsch-to-serious ratio, which requires an awareness everyone else (including the director) seems to lack.

Rodriguez doesn’t get how to manipulate gutter-trash content for maximum amusement. We don’t want to hear Vergara graphically describe feasting on the genitals of her sexually abusive father because no sane person would want to hear that. We do want to see nonsensical action and physics-defying cheap effects. Most of all, we don’t want to slog through an intentionally terrible movie that is often boring to get to the three or four “good” bad moments. If the return on investment were any poorer, we’d be offering Rodriguez TARP money.

Worst news: They end on a cliffhanger setting up a sequel that actually could be brilliant fun. It’s what they should have done this time, instead of trotting out the same, lame rehash of Trejo murdering with cutlery. Machete Kills was a lifeless impression. But if we do get Machete Kills Again…in Space, I don’t know that I can resist.