Home » Film » No One Promised “Great” 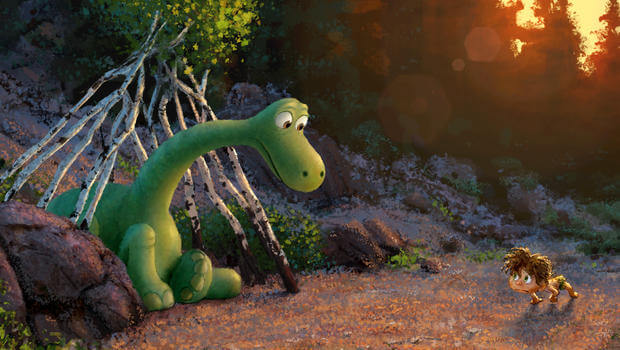 Pixar’s The Good Dinosaur is a retelling of every story involving a beloved pet ever told, with the twist being the human is the pet. In an alternate reality where dinosaurs and man walked the earth together (that’s called creationism), Aldo (Raymond Ochoa), a runt of an apatosaurus, is tasked by his father (Jeffrey Wright) with catching a “critter” stealing their food. That critter is a young boy who Arlo lets escape. One night, Arlo chases him, falls into the river and winds up miles from home with only the young boy as a companion on his way back. That’s it.

And it’s fine. The dinosaurs’ cartoonish design sometimes clashes with the hyper-realism of their CGI environment, the villainous pterodactyl-things are a rip-off of the hyenas from The Lion King and the message is an unoriginal affirmation to “be brave.” Overall, it tries hard to cling to the bottom rung of “good” for dear life. These kinds of movies are notoriously difficult to critically engage. But there is something worth talking about. But to do that, spoilers are needed. If you wanna preserve the integrity of a “boy and his dog” cartoon, jump ship here and skip to the grade at the bottom.

Spoiler time: Arlo’s father gets killed in the first act. In another “homage” to The Lion King, Arlo watches his dad get “trampled to death” buy a surge of flood waters. Dead dino dad appears later in the film as well, as a hallucination of Arlo’s, who must then watch his Poppa turn into a pile of dust and blow away in his mind. Some have blasted The Good Dinosaur as being too sad. I’m here to argue that’s bullshit. (Bonus points: Pretty sure this is the only review of this that will use the word “bullshit”).

Sad things in real life don’t wait until children are mature enough to handle them. They just happen. Storytelling of all kinds has long served as a soft set of experiences with which to practice. That is to say, processing the emotions associated with a fictional character dying can lay the groundwork for coping when it happens in real life. Poppa’s death here is unexpected and sad, but listening to the little sniffles in the theater, I thought of how much easier it must feel to be introduced to death by a cartoon dinosaur than by the loss of a pet or (God forbid) a loved one.

We have long been in the business of sanitizing childhood. In 1971, 80% of third graders walked to school alone. Today, less than 4% do. Now, I’m not here to tell anyone how to raise a child, only that gentle fictional introductions to huge life crises are not only safe, they are necessary. For me, The Good Dinosaur will be a pleasant, forgettable experience. But for some kid out there, it’s going to be the first time they grappled with the concept of mortality. In that sense, the movie may not be that good, but at least it’s doing good.