Home » Film » Anything Dudes Can Do… 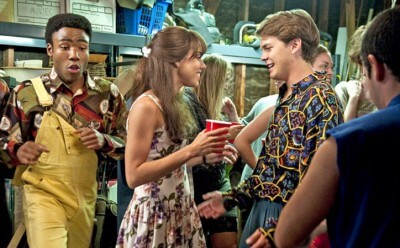 Before anything else: How great is Aubrey Plaza, right? From her droll, intentionally weird character on NBC’s “Parks and Recreation” to her killer late-night TV interviews (just watch the last one with Conan O’Brien if you doubt), Plaza is deliciously and completely secure in herself. She alternatingly flaunts and completely masks her sexuality, draws focus to gender conformities and then pisses on them. She’s the kind of actress and comedienne who just needs to get spectacularly, stupidly famous for so many reasons.

Unfortunately, it’s probably not going to be because of The To Do List.  Oh, it could have been. If writer/director Maggie Carey’s film were just a hair tighter, only slightly less clunky and inconsistent, it could have been a sister film to Easy A, which helped truly launch Emma Stone. But unlike that superior film, The To Do List is sometimes measurably un-clever and repetitive, launching torrents of uninspired vulgarity just to see what sticks to the comedy wall and running through various sexual scenarios when fewer would have had the same effect.

Plaza plays Brandy Klark, who just graduated as the valedictorian of her high school in 1993. She’s a mathlete, so sex is an abstract idea to her. When her friends, Fiona (Alia Shawkat) and Wendy (Sarah Steele), trick her into going to a kegger, she meets Rusty Waters (Scott Porter). Rusty is maybe the greatest character in The To Do List; after countless shallow, big-chested girls next door have prompted sexual revolutions in the pants of cinematic male teenagers, Rusty is the first “himbo” to serve the same role. Brandy immediately decides she wants him to punch her “V card.”

The moral of The To Do List appears to be “sex is important and unimportant,” which is a pretty real and sophisticated message rarely spoken in a language intended to reach both genders. Unfortunately, the trappings are clumsy. It’s not that hearing Bilson and Plaza dump truckloads of F-bombs or seeing a female character finally demonstrate sexual ownership is a bad thing; it’s that it’s not done all that well. Pushing raunchy boundaries can yield great comedy, but poop gets eaten in this…poop gets eaten…

The To Do List feels like the first draft of a classic comedy. But plot strands get away (like Bilson and her fiancee), situations are redundant (Brandy didn’t need to cover four different sex acts with three different guys when only one of them was funny) and the end result is a mixed bag of sexual empowerment and stupidity. Don’t worry though: Ms. Plaza will break through one way or another.