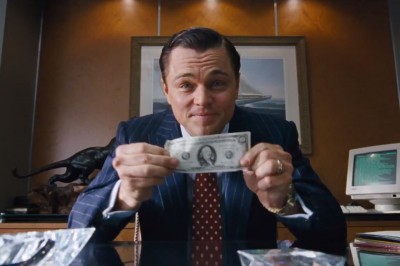 To review of The Wolf of Wall Street at this stage of the game is to enter into an ongoing narrative feud with able critical champions on both sides. Does the film’s dramatization of real-world douchehammer Jordan Belfort’s drug-fueled depravity lend tacit approval, implicitly embracing harmful excess for entertainment? Or does it offer a back-handed critique of “Wall Street executive as modern Caligula” and our apathy about prosecuting it. Um…neither?

Belfort (Leonardo DiCaprio) is depicted as the aspiring asshole’s Horatio Alger. He starts at ground zero with a firm led by a chest thumping madman (Matthew McConaughey) that quickly dissolves. Instead of giving up, he leads a ragtag band of misfits to success selling “penny stocks,” in a less-than-savory-or-legal scheme. With the help of the ridiculously-toothed Donnie (Jonah Hill), Belfort soon starts his own firm that uses beyond-shady practices. Before you know it, Belfort and his boys are snowboarding on cocaine drifts and putting their business wherever they want in both literal and euphemistic senses.

As comes the rise to riches, so comes the inevitable fall to conviction and despair. Those who see The Wolf of Wall Street as the modern bookend to Goodfellas aren’t wrong, as once more greed and criminality befall the charming but crooked. But there’s the rub: the comeuppance in director Martin Scorsese’s earlier movie was palpable. The last line in Goodfellas is Henry’s admission that he’ll spend the rest of his life “as a shnook.” The last thing shown in The Wolf of Wall Street is Belfort looking healthy and happy having reinventing himself as a seminar-leading sales strategy teacher.

That ending, combined with unnecessary and wholly redundant sequences of debauched extravagance, have led to a critique of the film as a “secondary exploitation” of all the victims of Belfort’s real-life crimes. But that reading completely ignores the repeated shaming and emasculation of Belfort; Scorsese shows him to be a feeble coward and a flat-out depraved criminal. The problem is that the film drops the ball when it comes to FBI agent Denham (Kyle Chandler). The easiest way to stick a middle finger at Wall Street would be to depict Denham as a hero, the white knight champion of the 99%. Instead, he mostly gets ignored, save for a weird final shot on the subway that almost suggests he wishes he were Belfort himself.

DiCaprio gives his best performance yet, seductively selling when not frantically yelling. That alone redeems an experience that is a wolf in sheep’s clothing: it is a film that appears to be about something but really has little to say. One more note: Margot Robbie crackled as Belfort’s wife, a fascinating character that is largely ignored. It sure would have been nice to see more of her. More of her character, that is, we see plenty of her physical form and those of scores of other women paraded about and copulated with relentlessly. Trim an hour of the repetitive smut and insert a cohesive thesis for DiCaprio’s performance to rely on and maybe this would have earned all the praise it has received.