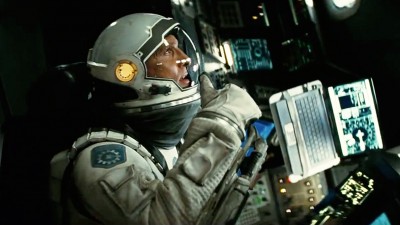 Preposterous, pseudointellectual, poorly constructed, clichéd, impenetrably masculine, goofy and possessed of an indecipherable ending, Interstellar is the mother of all misfires. It is a bloated juggernaut of stupidity, rolling its obese body stuffed with melodramatic subplots towards a conclusion that would have been laughed at had it been anyone other than writer/director Christopher Nolan who pitched it. Irritatingly, because Nolan has endeared himself to a loyal legion, the film will have its defenders and apologists. They will be wrong.

Interstellar opens well enough; set some indeterminate time in the near future, climate change has borked the planet into full-on disaster. Those who can must grow crops in order to feed what’s left of humanity. This includes Cooper (Matthew McConaughey), a former NASA pilot and single father of two. His young daughter, Murphy, tells Cooper that she has a ghost that haunts her room, pulling books off the shelf in an attempt to send her messages. Turns out, within her bedroom is a “gravitational anomaly” that spells out coordinates.

Cooper follows said coordinates and discovers a secret NASA facility that intends to shoot a spaceship into a wormhole to find a planet that can sustain humanity. The leader, Professor Brand (Michael Caine), asks Cooper to pilot the ship, accompanied by three other astronauts, including Amelia Brand (Anne Hathaway), the Professor’s daughter. The voyage means traveling through space in such a way that those aboard age slower relative to the folks at home. For the rest of the movie, we follow not only the alternatingly macabre and silly space misadventures but also Cooper’s kids, Murphy (Jessica Chastain) and Tom (Casey Affleck), as they age on earth and cry a lot.

In fact, if there is one defining characteristic of Interstellar it is weeping; nonstop, grating, irritating weeping. As though the set were built on a bed of freshly cut onions, Nolan confuses having people act sad with making his audience feel something. McConaughey cries like 50 times, Hathaway cries, Chastain cries, Affleck cries…hell, Michael Caine cries. And he’s British. They don’t do that. It is as though Nolan is some kind of overly intellectual alien attempting to learn emotions. “Why human cry? Human sad? Oh, human cry when sad!” This would explain the scene in which Hathaway attempts to describe love as a function of quantum physics.

The worst part, hands down, is what will be referred to as “the twist.” It isn’t a twist, however, as it takes anyone who has seen a sci-fi movie literally 5 minutes to know the ending. Oy vey and that ending… For the record, Mr. Nolan, having a character spout nonsense gibberish about fifth dimension temporal understanding is no different than saying “ta-da! Magic!” Looking no prettier than the TV show “Cosmos” and not as space-terrifying as Gravity, Interstellar is easily the year’s biggest disappointment and the shiniest turd several hundred million can shine. Inception was proof that Nolan is capable of constructing a vastly entertaining and original, intelligent blockbuster; Interstellar makes me want to watch Inception again.