Count El Museo Latino among the signature venues in this city’s cultural maturation. Founder-director Magdalena “Maggie” Garcia noted a paucity of Latino art-culture-history displays here. Like other place-makers, she didn’t wait for someone else to do something about it. Acting on her lifelong interest in Latino heritage, she left a business career to learn about museums and in 1993 she launched her nonprofit.

Five years later she led the move from there to the present 18,000 square foot site at 4701 South 25th Street in the former Polish Home. Growth necessitated the relocation. As the museum consolidated its niche, it expanded its number of exhibits and education programs. It hosts events celebrating traditional art, dance, music, film and ethnic food.

The museum launched amidst the South Omaha business district’s decline. It prospered as the area enjoyed a resurgence of commerce – finding community and foundation support. From 1993 till now, Garcia’s nurtured a passionate dream turned fledgling reality turned established institution. In celebration of its 25th anniversary, El Museo Latino is hosting a Saturday, October 13 Open House from 11 a.m. to 2 p.m.

Visitors can view a special contemporary textiles exhibition by Mexican artist Marcela Diaz along with selections from the permanent collection.

A quarter century of presenting national-international traveling exhibits and bringing visiting artists, scholars and curators only happened because Garcia didn’t let anything stop her vision. She didn’t ask permission, She didn’t heed naysayers who said Omaha didn’t need another museum. She didn’t delay her dream for her board to find a more suitable space or to raise money.

“My attitude was, let’s get something established instead of waiting for funding, for a different space, for this or that. I just thought we needed to do it now – and so we went ahead, Besides, who’s going to give us the authority to say what we can have and not?”

Retired University of Nebraska at Omaha arts education administrator Shari Hofschire lays the museum’s very being at the feet of Garcia.

“Maggie Garcia’s passion is the building block of its 25 year history. She doggedly fundraised and programmed. She recognized the need for a community-cultural identity just as South Omaha was growing with new residents.”

Hofschire added the museum’s now “a catalyst for both the past traditions of Latino history and culture and future opportunities for the South Omaha community to express itself and expand its cultural narrative.”

As a founding board member, David Catalan has seen first-hand the transformation of Garcia’s idea into a full-fledged destination.

“Underlying the foundation of El Museo Latino’s success was Maggie’s leadership and outstanding credentials in the arts  Her outreach skills harvested financial support in the form of foundation grants and corporate sponsorships,” Catalan said. “Her organizational acumen created a governing board of directors, each with resources necessary for achieving strategic objectives. The museum’s programs and exhibits drew rapid membership growth as well.

“Today, El Museo Latino is a treasured anchor in the cultural and economic development of South Omaha. Another 25 years of sustainability is assured so long as Maggie Garcia continues to be the face of inspiration and guidance.”

Garcia spent years preparing herself for the job. She performed and taught traditional folk dance. She collected art. She met scholars, curators and artists on visits to Mexico. After earning an art history degree, she quit her human resources career to get a master’s in museum studies and to work in museums. Seeing no Latino art culture, history centers in the region, she created one celebrating the visual and performing arts heritage of her people.

Her efforts have been widely recognized. In 2015 the Mexican Government honored her lifetime achievement in the arts.

With the museum now 25 years old and counting, Garcia’s excited to take it to new heights.

“I don’t want us to just coast. I don’t want it to get old for me. For me the excitement is learning and knowing about new things – even if it’s traditions hundreds of years old we can bring in a new way to our audiences.

“We want to continue to challenge ourselves and to always be relevant by finding what else is out there, where there is a need, where do we see other things happening. Hopefully that’s still going to be the driving force. It has to be exciting for us. We have to be passionate about it. Then how do we bring that interest, love and passion to do what we said we’re going to do and to make it grow and fulfill needs in the community.” 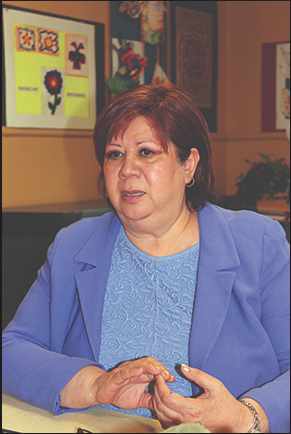 She cultivates exchanges with Mexican art centers and artists to enrich the museum’s offerings. A key figure in these exchanges is artist-curator Humberto Chavez.

“We have connections with artists and centers in different parts of Mexico because of him,” she said. “He’s a professor of art in Mexico City and he was head of all the art centers throughout the country. He’s very well connected. That’s a huge window of opportunity for our artists here and a real plus with our residency.

“We’re not just giving artists a place and time to work and a stipend, but trying to provide them some other opportunities they wouldn’t necessarily be able to get.”

Besides exposing artists and patrons to new things, Maggie’s most pleased when art connects with youth.

“I had a group of elementary students come in to see an exhibition of traditional shawls, Some of the boys and girls said, ‘What are those things doing here?’ Then as I talked about the different fabrics and colors, how the shawls are worn, what they mean, how they’re created, all of a sudden the kids were oohing and aahing at the rainbow of materials and history..

“When we came to a map of Mexico showing where the shawls were made, the kids were asking each other, ‘Where are you from?’ One said, ‘I don’t know where I’m from, but I’m going to go home and ask.’ Another pointed at the map and said, ‘Well, I’m from that state.’ Suddenly, it was accepted by their peers and so it was okay to value who they are.

“I see that all the time here. It’s very satisfying.”

Satisfying, too, is seeing the fruition of her dream reach 25 years.

“The journey has been an adventure. It hasn’t been easy. There’ve been challenges, but I thrive on challenges. If someone says, this is the way it’s been done forever, all the more reason to say, why not make a difference.”