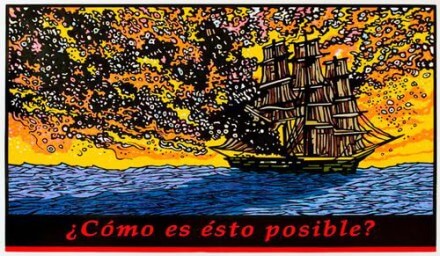 In keeping with its tradition of exhibiting exceptional fine art prints, Gallery 72 offers Endi Poskovic: It Was All Just a Dream: Selections from 2003 – 2013 featuring over 45 works by this gifted artist and educator. The exhibition presents Poskovic’s signature color woodblock prints that reference a Japanese genre or style known as ukiyo-e. Also included are several black and white lithographs, a signal of expansion in his conceptual thinking.

The presentation in the gallery of the framed works, arranged in groups, has a striking effect of images clustered for a particular reason. The titles of each print do not correspond to the word printed below each image. This amplifies the print as a construction of embedded ideas. The different foreign languages printed in each image impart a cosmological sensation of shifting time, place, and space. Each print appears to have a monolithic subject, placed in a specific space and atmosphere, named but not known.

The work is placed within the overall installation that supports the collective narrative, while the individual image serves as a single voice. “We Were All from Gray to Pink with Tyrol Blue to Yellow Orange with Deep Red (for Frederic Edwin Church)” is large in scale. The multi-hued sky reflected in the water provides a colorful panorama for a massive iceberg. The red words Das ist Walter set in black simultaneously challenge and engage the eye. All four prints in this group depict icebergs. Each single iceberg image has the same written text. The two double iceberg images repeat the text Das ist nicht mein Krieg. The thematic organizational structure of the exhibition becomes another layer of counter-referencing information. There are variations of groups and images to see.

“I carefully conceive these works in groupings inside the gallery but also inside my own understanding of how I envision these works in relation to each other,” Poskovic said during his gallery talk. “Everything here is related to everything else here. More importantly, everything here is related to everything that is not in this room, at this moment. It’s a fascinating web and maze of thoughts and ideas, and processes, and most importantly life experiences that I very meticulously, carefully attempt to construct in my head.”

It is immediately clear in the experience of a Poskovic print that what you’re getting is not entirely what you’re seeing. Gazing at one of these prints becomes an apprehension of the unseen and unknown. The unknown being what came before, and after, this particular moment captured in an amalgam of image, text, paper, and ink. “If This Be Not I in Cream, Gray, and Dark Orange with Red” is an image of a 19th C. sailing ship on a deep blue sea with an orange, yellow, black, and white filled sunset or sunrise. The black and white text beneath the image says Cómo es esto posible? How is this possible?  Add to this an exceptional degree of skill and craftsmanship, and the viewer is still not sure. How is “what” possible? That’s the conundrum and beauty of it all.

“Disparate connections are very much about how I interpret. Fragmentation and memory are very integral to how I think. I really attempt to construct these things in that way, to make them very cohesive, and make them very, very tight together as if they are inseparable,” he said.

The black and white lithos are drawn from small aluminum models Poskovic made. He floated them in a tray of water, filmed them, and then drew the images from the film stills. The classical drawing’s translation through lithography’s dense method pays homage to the history of the process invented in 1796 by German author and actor Alois Senefelder. Initially a cheap method for promoting theatrical productions, lithography went on to be utilized as a fine art medium.

The dual nature of printmaking’s history, as either fine art to be collected or popular poster to be discarded, is an aspect of the tension inherent to Poskovic’s studio practice. He is in the process of having the lithographs develop into an animation in three parts. This new direction in his thinking will be exciting to see.  His conceptual orientation seems rooted in “historical deference meets global possibility.”

Poskovic’s birthplace was Sarajevo, Bosnia, and Herzegovina. While he was not a political refugee, the history of his country of origin feels filtered through his work. This exhibition reflects contemporary life through the lens of an actively intuitive imagination. It is an experience not to miss.