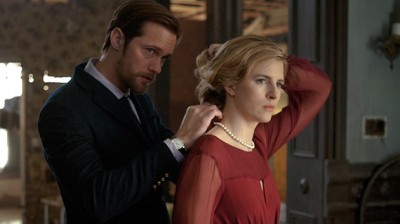 Admittedly, you may not know it yet. You may not have had a chance to watch her acting A-bombs drop in smaller films like Sound of My Voice or Another Earth. It’s even more likely that you don’t know she co-wrote those films too, demonstrating an intellect that compliments innate talent. But there are only two choices: either you love Brit Marling or you will love Brit Marling. The proof is The East.

Marling’s second feature-length team-up with director Zal Batmanglij, The East joins Upstream Color in making 2013 the year that proves art and thrillers are not enemies. Clever without pretention, mysterious without twisting itself into a pretzel, The East is like an indie blockbuster: it relentlessly entertains but never by wading into the lowest common denominator.

Marling, who you love (remember?), plays Sarah, a former FBI agent turned private investigator for a corporation specializing in preventing activist attacks against corporations. Her boss, Sharon (Patricia Clarkson), tasks her with infiltrating “The East,” a group populated by people who look like they don’t eat gluten and only listen to vinyl records. Their leader, Benji (Alexander Skarsgård), is all bearded trouble. His actions say “terrorist,” but his doe-eyes say “love me, hipster.”

Although Benji is seemingly quick to trust Sarah, Izzy (Ellen Page) isn’t. She immediately warns against including Sarah in their next “jam,” a delicious nickname given to their publicized acts of civil disobedience. Things escalate like the unathletic at the mall; suddenly, Sarah is forced to weigh various different moral concerns against economic concerns and “loin-based” concerns. The resultant series of decisions plays out if not in stunning and surprising fashion, in inarguably satisfying fashion. This is unsurprising in that you’ve come to expect as much from Marling. It’s part of why you love her.

Batmanglij’s previous film, Sound of My Voice, may be better but not by a lot. Once more he shows an ability to deliver fully realized and developed characters with satisfactory character arcs embedded inside more fiesty plot elements. It is a testimony to him, and to the object of your affection (Brit Marling), that The East makes you as eager to see how Sarah turns out as how her machinations do. Somewhat surprisingly, the most veteran actor turns in the weakest performance. Page’s whiny, naïve activist turns her sincere speeches into boring chores of cliched dialogue.

The moral center of the film is enough to ensure conservative radio ads are a no-go. The villains are soulless corporations, anti-environmentalists and the wealthy in general. The wrap-up over the credits plays like a liberal vegan’s wet dream. But you know what, it’s damn nice to see a thriller where the bad guys aren’t nebulous Middle Eastern terrorists for once. Besides, this was at least in part Brit Marling’s idea, and you love her.

The East is very good. It is substantive suspense packed with thoughtful thrills and one brilliant Brit. The only sad part  is how few people will get to experience it.